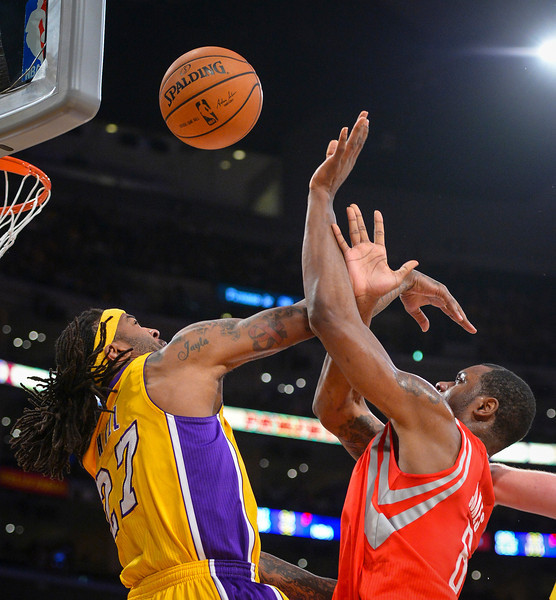 Jordan Hill sat by his locker stall in a relaxed state despite all the chaos swirling around him.

This may have marked his last day with the Lakers, coming on the heels of a 134-108 loss Wednesday to the Houston Rockets at Staples Center. The Lakers engaged in plenty of trade discussions regarding Hill with various teams including the Brooklyn Nets, Phoenix Suns, Cleveland Cavaliers and Dallas Mavericks, according to a league source.

Yet, Hill hardly sounded concerned on what scenarios might play out.

“It’s up in the air. I just have to wait it out now,” Hill said. “It’s a business. I’d definitely like to finish out my season here. But it’s a business. Whatever happens, happens.”

But if it’s up to Hill, he’d like to stay with the Lakers right?

“I do, but I do want to play though,” said Hill, who posted 10 points on 5-of-7 shooting and seven rebounds in 26 minutes against Houston. “I want to play and get the minutes I need.”

Hill has averaged 8.5 points and seven rebounds through 19.6 minutes, but has experienced challenges cracking the rotation under Lakers coach Mike D’Antoni consistently. D’Antoni often prefers floor spacers and shooters over post players. But Hill has earned playing time because of his endless hustle and defensive presence.

“It’s been hard. I’m definitely not knocking coach Mike D’Antoni. He knows his offensive game. He knows his strengths. I’m just staying ready whenever he needs me. I definitely think he’s a heck of a coach. I’m just going to stick by it,” Hill said. “I’m a workhouse. I think I fit in anybody’s system. Somebody needs an energy guy to get the offensive boards and alter and block shots and provide putbacks.”

Hill and D’Antoni haven’t had the best relationship.

Hill entered his rookie season with the New York Knicks under D’Antoni in a diminished role despite being selected as the eighth pick in the 2009 NBA draft. After averaging four points in 25 minutes through 24 games in New York at the beginning of the 2008-2009 season, Hill was traded to the Houston Rockets with Jared Jefferies before the trade deadline as part of a three-team deal that resulted in the Rockets’ Tracy McGrady going to the Knicks.

D’Antoni has since lauded Hill’s effort, but noted that he can’t absorb heavier minutes because his energy only comes in short bursts. D’Antoni also scoffed at complimenting Hill simply for maintaining his work ethic despite fluctuating minutes.

“What’s impressed me that he does his job? That shouldn’t be a question,” D’Antoni said. “When they say, ‘I don’t know my role.’ The role is to play hard and if you’re open, you shoot. If you’re not, you pass and then you play good defense. That’s your role. Everybody should know your role. We should never have a conversation where its impressive he works hard. Everybody should work hard. He comes and is ready to go. It’s a good trait to have, but it’s normal.”

Hill is also used to this process. The Rockets traded Hill in 2012 to the Lakers in a deal originally meant to dump Derek Fisher’s salary and clear up the backcourt for newly arrived point guard Ramon Sessions. Hill has stayed on since, perhaps until today.

The Nets were initially reluctant to acquire Hill because they absorb a $17 million luxury tax penalty for acquiring the remaining $3.5 million on his expiring contract. But a league source said Brooklyn has since softened its stance considering it has a $5.25 million disabled players exception to absorb Hill’s contract. Still, the Nets will shell out around $190 million in combined payroll and luxury tax. Yahoo! Sports first reported the initial conversations between the Lakers and Nets.

“I’ve been through this a couple of times. It keeps you on your toes. You just have to be prepared for it,” Hill said. “Whatever happens, I had a great time with the Lakers. I’ll still have a great time if I stay for the season.”