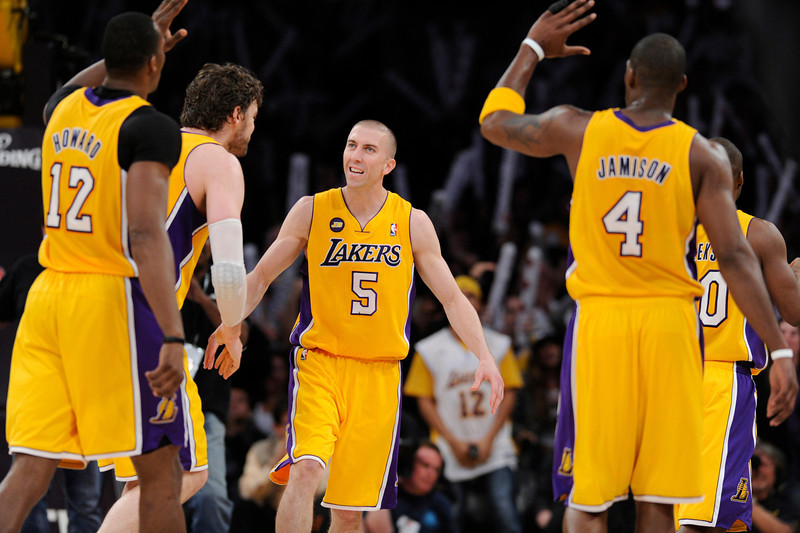 Lakers#5 Steve Blake is congratulated for a go-ahead 3 pointer late in the 4th quarter. The Lakers defeated the Houston Rockets in overtime 99-95 in the final home game of the year at Staples Center in Los Angeles, CA 4/17/2013(John McCoy/Staff Photographer

A sense of sadness and gloom permeated the Lakers, and that happened well before Dwight Howard rubbed it in their face with an endless charade of dunks, blocks and athleticism.

Hours before their 134-108 loss Wednesday to the Houston Rockets became official, the Lakers learned they’d lose yet another key piece to their roster. And for once, it didn’t involve an injury.

The Lakers traded Steve Blake to the Golden State Warriors for two young seldom-used point guards in Kent Bazemore and MarShon Brooks, the first sign of a white flag in the team’s effort to rebuild and trim salary. Blake learned about the deal shortly after participating in pre-game warmups. Soon enough, Blake dressed back into street clothes and shared farewells with teammates, coaches and team officials before departing the arena.

“I was more disappointed that it was him,” Lakers coach Mike D’Antoni said. “There were a lot of guys. Management has to do to retool. You have to do a lot of things. But you hate it for him.”

That’s because Blake provided everything that D’Antoni wants in his system. Blake relentlessly provides energy, hustling for looseballs, setting up teammates on pick-and-rolls and making outside shots with dependable accuracy. Despite appearing in only 27 games because of a hyperextended right elbow, Blake posted a dependable 9.5 points and 7.6 assists.

“He was a joy to coach,” D’Antoni said. “Every coach should have an opportunity to coach somebody like that. He is one of the toughest guys I’ve ever coached. He’s good. At any team that wants to win, he’ll be a nice piece.”

His four-year career with the Lakers entailed some tough moments, though. Blake admittedly felt tentative his first two years with the Lakers under Phil Jackson and Mike Brown in part because of their offense and adjusting to Kobe Bryant. He also had a slew of ailments. Blake suffered chicken pox in the first round of the 2011 NBA playoffs. He sat out for 13 games the following season because of a fractured rib. Blake missed a combined 36 games last year because of overlapping injuries in his abdominal muscle and groins.

But Blake provided some signature moments, such as a 19-point effort in Game 7 of the Lakers’ first-round series win over the Denver Nuggets in 2012 and a game-winning 3-pointer in Houston in November in the Lakers’ first game against Howard since he left the team.

What will the Lakers miss the most?

“His professionalism and the way he plays the game,” Lakers guard Jodie Meeks said. “He knows the guard position. He plays through injury and sickness. We’ll miss him as a teammate. It’s the nature of the business. Sometimes that stuff happens.”

This happened because the Lakers are well aware of their doomed playoff fortunes this season. The move allowed them to save a $4 million in combined salary and luxury taxes. It’s possible Bazermore and/or Brooks could develop at a relatively cheaper price. But for a team that’s ailing so much with an injury-depleted backcourt, Blake’s departure provided one huge dent.

“He’s definitely a great guy and definitely a mentor and a great player and fun to talk to,” Lakers forward Jordan Hill said. “You can talk to him about anything and he’ll listen. He seems pretty quiet, but he’s a guy who will definitely make you laugh and put a smile on your face.”

When he stepped on the court, however, his personality changed.

“He’s a tough little small sucka, ain’t he?” Hill said, laughing. “Basketball wise, he’s somebody who competes, plays well and plays hard and tries to make the right play. He’s a tough guy and it’s good to have him out there to guard somebody bigger. He’ll scrap and fight for rebounds and do whatever he’s asked to do.”

Jordan Hill wants to stay with the Lakers, but vouches for consistent playing time