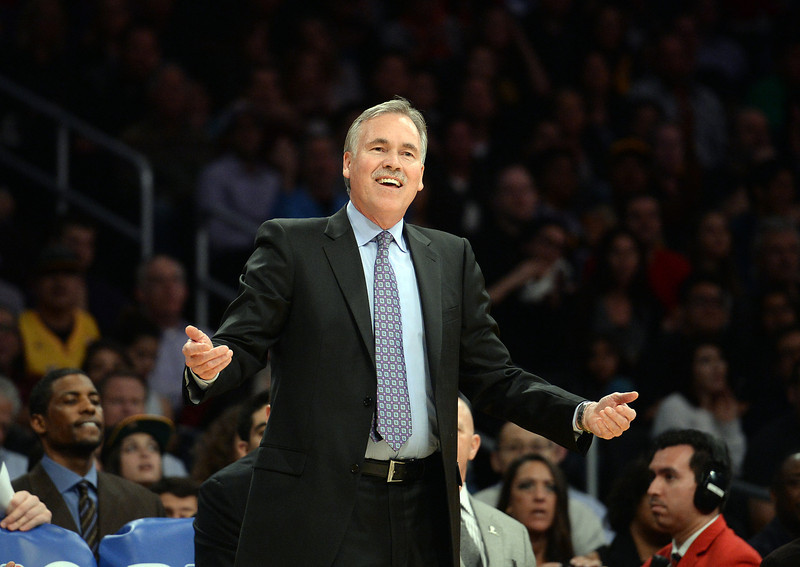 The Lakers aren’t winning the NBA championship this season. They’re not making the NBA playoffs, either.

So what are they playing for in their remaining 28 games? OK, so if you break down the mathematics, the Lakers (18-36) could take the No. 1 seed in the Western Conference if a number of scenarios happen. 1. The Lakers nearly go undefeated. 2. Oklahoma City (43-18) coughs up no more than two wins through the rest of the season. The Lakers could technically make the playoffs, assuming bottom feeding contenders such as Phoenix (32-21), Golden State (33-22) and Dallas (32-23) plummet.

In other words, the Lakers have a .0000000001 percent chance of their season going beyond mid-April. So with that framework in mind, how does Lakers coach Mike D’Antoni treat the rest of his season? Does he approach it like a training camp where he cares more about lineup combinations than bottom-line results. Or is D’Antoni still fixated on padding the Lakers’ awful win total?

“You try to win and you try to play well,” D’Antoni said. “If they can’t fit into that, then they can’t play. With winning, it’s not about an individual’s game. It’s about winning. We’re going to do everything we can to have a great record these last 28 games and see who fits into that. They’re all talented players and they all can play losing basketball. That’s not hard to do. But we’ll see who plays winning basketball and try to build on that.”

The Lakers (18-36) enter tonight’s game against the Boston Celtics (19-36) at Staples Center with the pretty clear message from the front office that they’re looking ahead toward next season. Even if the Lakers failed to acquire additional draft picks or fall below the luxury tax threshold, trading Steve Blake to the Golden State Warriors for seldom-used guard Kent Bazemore and MarShon Brooks sent a clear message the Lakers are worried more about long-term development than maximizing this season’s win totals.

Lakers forward Pau Gasol will play after nursing a strained right groin for the last nine games. Lakers guard Jordan Farmar will play around 20-25 minutes in his second games since nursing a hamstring injury. Blake’s departure coupled with Steve Nash’s absence (nerve irritation in back) will thrust Kendall Marshall back into the starting lineup. With continual injuries to Kobe Bryant (fractured left knee), Nick Young (fractured left knee) and Xavier Henry (bone bruise in right knee), D’Antoni also plans to play Bazemore and Brooks between 15-25 minutes tonight against Boston. Essentially everyone outside of Bryant will audition for their NBA future.

So how does D’Antoni evaluate whether his players fit into the rotation?

“For me, the first thing starts with energy especially on the defensive end,” D’Antoni said. “You do what you do and can you hone in everyday and bring that? Offensively, can you not be an individual? Can you play with your teammates? If you do those two things, you’ll get time and that will give you time to develop.”

D’Antoni then shares his feedback with the Lakers’ front office, including general manager Mitch Kupchak and vice president of player personnel Jim Buss.

“We talk all the time,” D’Antoni said. “I’ll have my opinion, but whether it’s weighed or not, we’ll wait and see. I think it’s a normal thing. Everybody talks all the time as a staff. You get a pretty much get a consensus.”

Just as D’Antoni stressed the front office has no direct influence on playing time, the Lakers’ players stressed their individual auditions won’t compromise their team mindset.

“I just want to play,” Farmar said. “We play to win. Coach coaches that way and we try to get wins every night.”

Still, players are also aware of the big picture implications of their career.

Bazemore has played limited minutes in Golden State and has provided energy, but he’s known more for his celebrated dance moves off the bench than his actual play. He also conceded playing with a chip on his shoulder after going undrafted in 2012 after starring at Old Dominion.

“My contract expires at the end of the season so it’s definitely an important time for myself personally,” said Bazemore, who made $750,000 this season with Golden State. “But I’ve never been a selfish kind of player. I’m here to play under Coach D’Antoni’s system. Whatever happens, happens. But I’m going to bring consistent effort every night.”

Meanwhile, Brooks rookie season with the Nets where he averaged 12.6 on 42.8 shooting in 29.8 minutes soon soured in a diminished role in Brooklyn in the 2012-13 season (5.4 points in 12.5 minutes) and this season both in Boston (3.1 points in 7.3 minutes in 10 games) and Golden State (1.9 points in 2.1 minutes in seven games). Brooks said he’s eager to prove he’s improved defensively, that he can still score at a prolific rate and that he can both play at shooting guard and point guard.

“I haven’t played basketball in a long time. I’m excited to see how good I’ve gotten,” Brooks said. “I expect a little rust, but I’m just going to go out there and play hard. Everything else will fall into place. It’s basketball. The main thing is playing with a lot of effort.”