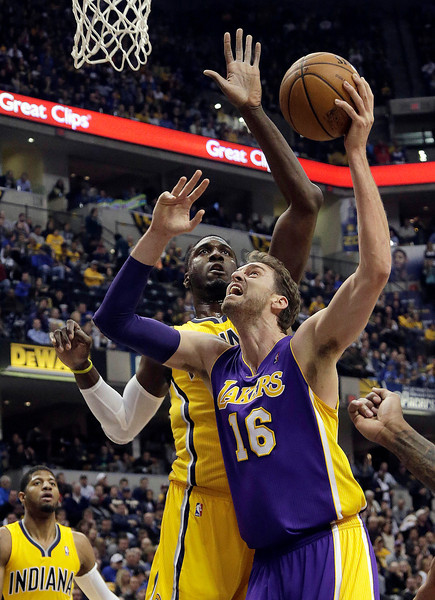 INDIANAPOLIS — Pau Gasol emerged out of the locker room with a stern expression and an irritated tone in his voice.

The reasons went beyond the Lakers’ 118-98 loss Tuesday to the Indiana Pacers at Bakers Life Fieldhouse, marking their sixth loss in the past seven games. It also entailed Gasol’s frustration with Lakers coach Mike D’Antoni fielding a smaller lineup to handle a loaded Pacers frontcourt that outrebounded the Lakers, 62-42, and posted 50 points in the paint.

“If we want to continue to play small, we have to play to that advantage and utilize our quickness,” said Gasol, who had 13 points on 6-of-13 shooting, nine rebounds and four blocks. “If you get outrebounded by 20 rebounds, I don’t care who you are or what you do it’s not going to work and we’re not going to win.”

“Good luck,” Gasol said, sarcastically. “Let’s see what happens tomorrow if Wes continues to start or if we actually match up and utilize our size. We have guys with size who can do well.”

D’Antoni’s take on the Lakers’ lack of size against the Pacers?

“It absolutely means nothing,” D’Antoni said. “We didn’t play well enough. We didn’t move the ball.”

“We’re not playing the way we were before,” Marshall said. “It’s not fun at all. We need to figure it out and find ways to be competitive.”

Kent Bazemore remained the lone positive development, his career-high 23 points on 8-of-19 shooting, marking his third consecutive double-double since the Lakers acquired him last week from Golden State along with MarShon Brooks for Steve Blake.
The Lakers have gushed over Bazemore’s hustle, notably on defense. But Bazemore missed all four of shots in the third quarter.

“There’s too many individual actions right now,” Gasol said. “It’s not a good flow and rhythm out there when you have two guys that are brand new and they’re playing a lot of minutes. That’s going to take some time for the team and units to understand each other and be on the same page.”

That’s far from the case.

“Anytime you step on the floor, it’s an audition,” said Bazemore, one of many Lakers who will become free agents this offseason. “There’s probably a lot of teams watching.”

Gasol also fears the rest of the roster riddled with one-year deals has created instability.

“You have to be disciplined and implement discipline,” Gasol said. “I don’t think there’s a lot of discipline right now.”

Kobe Bryant has recently griped about the team’s lack of discipline, too. He hasn’t travel with the Lakers since their week-long trip three weeks ago with stops in Minnesota, Cleveland and Philadelphia because the soreness and swelling in his fractured left knee has kept him confined to a stationary bike. Bryant bemoaned that Lakers center Chris Kaman spent time during the Lakers’ win over Cleveland lying down on the bench as a funny way to illustrate the empty seats stemmed from persisting injuries.

“That Cleveland game, it was crazy,” Bryant said, referring to the Lakers’ win against the Cavaliers that entailed only a five-man rotation. “Then Kaman goes to sleep on the bench. It’s like when big brother is not around, he starts doing crazy [stuff]. It’s been rough.”

Gasol downplayed the necessity for Bryant and Nash to travel with the team considering their injuries. Even when accounting for Bryant’s dominating personality and locker room presence, Gasol argued it’s not his job to sit with the team simply to play babysitter.

“I wouldn’t put that responsibility on him,” Gasol said. “It’s frustrating with his situation and injuries. He would help and be a positive influence. But he doesn’t need to be the one implementing that discipline.”

Gasol didn’t name him specifically, but he strongly suggested that responsibility falls on D’Antoni. When asked what type of discipline Gasol would like, he reverted back to D’Antoni’s preference for small ball.

“The type that will allow us to compete better,” Gasol said. “When you have a lineup like Zach and Marc tomorrow, you have to match up accordingly. That’s just me.”

Nick Young to sit out of Lakers’ two-game trip

Nick Young says he still has swelling in his left knee, wants to protect his spot in the rotation