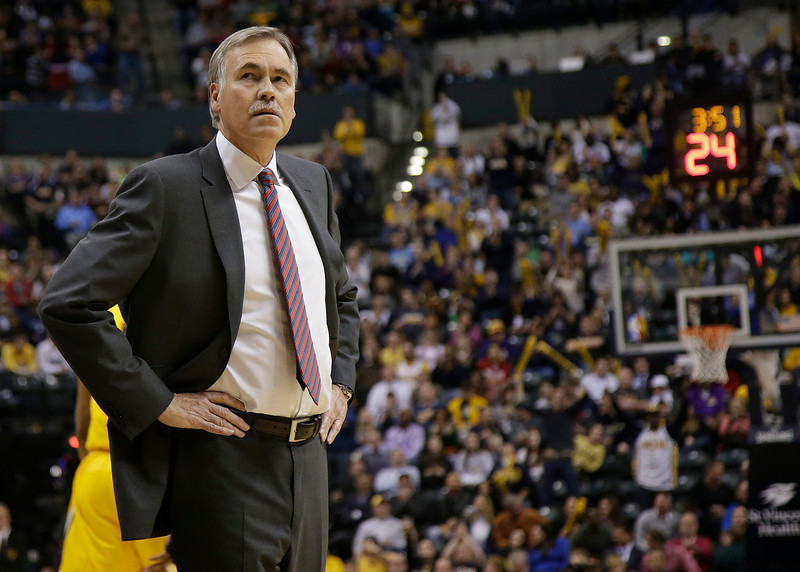 Los Angeles Lakers head coach Mike D’Antoni looks in the direction of the scoreboard while playing the Indiana Pacers during the second half of an NBA basketball game in Indianapolis, Tuesday, Feb. 25, 2014. The Pacers won 118-98. (A

“We want a certain type of basketball and we’re trying to establish that and put everything into it,” D’Antoni said. “Our numbers clearly say that when you spread the floor and move the ball and get up and down the floor, we have a lot better chance to win.”

“If we want to continue to play small, we have to play to that advantage and utilize our quickness,” Gasol said. “If you get outrebounded by 20 rebounds, I don’t care who you are or what you do it’s not going to work and we’re not going to win.”

Gasol uttered those words following the Lakers’ 118-98 loss Tuesday to the Indiana Pacers where the Lakers were outrebounded 62-42. D’Antoni issued his response just before the Lakers played the Memphis Grizzlies on Wednesday here at FedEx Forum.

“The thing I don’t appreciate is, I think every coach, you keep it in house,” D’Antoni said. “It’s very easy to come over and talk about your frustrations. We’ll try to work something out and figure something out. To go to you guys and do it in the papers, that’s disturbing. I don’t think that’s the way to go. I understand we’re all trying to solve the same problems. So let’s put our head together and do the best we can.”

Gasol attributed the Lakers’ loss to Indiana toward D’Antoni favoring Wesley Johnson to guard a bruising Pacers’ frontcourt over Jordan Hill, Chris Kaman and Robert Sacre. D’Antoni highlighted the superiority his small-ball lineups present in plus-minus ratings and how the Lakers’ 70-61 third-quarter deficit with 5:43 left ballooned after Johnson left the game because of five fouls.

“That didn’t hurt us last night. It gave us a chance to spread the floor and score at a good rate and stay in the game,” D’Antoni said. “When Wesley got into foul trouble and Ryan [Kelly[ got into foul trouble and we went big, that’s when it caved in because they’re a better and bigger team than we are. You have to play different. If you’re overmanned a little bit and try to match up with them, it’s not going to work.”

Both D’Antoni and Gasol lamented about the team’s lack of ball movement, with newcomers Kent Bazemore and MarShon Brooks taking 29 of the Lakers’ 90 field-goal attempts. Gasol attributed this trend toward a lack of discipline, while D’Antoni sounded confused by Gasol’s subtle charge that he doesn’t hold players accountable.

“I have no idea what he’s talking about,” D’Antoni said. “Last night, we should’ve had more ball movement. But I don’t know what that has to do with discipline. It has to do with guys trying too hard and guys not really understanding the system totally and not getting engrained into it.”

“You’re not going to stop Zach Randolph as much. He’s going to get his numbers. Marc Gasol is going to be good and they beat you. Plus, we want to establish our identity. This is how we want to play and we’re going to get better at it, push the ball and evaluate talent and get better at it,” D’Antoni said. “It’s frustrating to some players. Obviously if you lose playing one way, then [you argue] just play the other way. Well, you can get killed the other way. We go by numbers and feel. We want to establish an identity and not be all over the board every night. Changing something up and matching up with other teams, you don’t want to do that.”

Gasol sounded concerned the Lakers’ roster full of castoff players on one-year deals has contributed to an offense that features too many isolation plays. D’Antoni sounded concerned that Gasol’s $19.3 million expiring deal fueled his own frustration. Gasol posted 13 points on 6 of 13 shooting, nine rebounds and four blocks.

“When the ball doesn’t share, then your numbers go down and you get frustrated,” D’Antoni said. “The place to do it is in the dressing room among us. We have good guys that will listen and try to get better. That’s all we try to do. Why we open it up to you guys? With all due respect, that I don’t understand.”

And that’s why D’Antoni said he addressed the team about these very issues during the Lakers’ film session earlier on Wednesday.

“We talked to the whole team about ball movement,” D’Antoni said. “The two new guys coming in have had half a practice with us so obviously we have to teach them and buy into the system and get them to understand what we want. It’ll be nice. But they’re playing very hard and giving everything they’ve got, especially on defense.”

But where that speech and D’Antoni’s public exchange with Gasol leads to remains anyone’s guess. Gasol has voiced displeasure plenty of times in the past two seasons about not being featured enough under D’Antoni’s system, the coach’s preference for smaller and quicker lineups and last season’s occasional bench role.

If nothing else, the bubbling tension added some life to an otherwise dreadful season.

“You told me the other day, ‘What are we going to write?'” D’Antoni said. “Well, now there’s your story. We just helped you out.”

Eventually, D’Antoni finished answering questions and walked back into the locker room, hoping he’s closer toward cleaning up this mess.

“I have a root canal scheduled next week,” D”Antoni joked. “It doesn’t seem so bad now.”

Nick Young to sit out of Lakers’ two-game trip