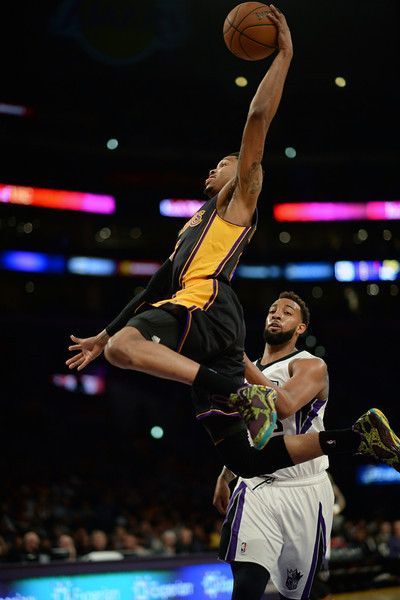 The Lakers’ Kent Bazemore #6 dunks the ball during their game against the Kings at the Staples Center in Los Angeles February 28, 2014. (Photo by Hans Gutknecht/Los Angeles Daily News)

Below are five things to take from the Lakers’ 126-122 victory Friday to the Sacramento Kings at Staples Center:

1. The Lakers offered little defense. For a coach that cemented his legacy with an offense dubbed “seven seconds or less,” Lakers coach Mike D’Antoni offered a nugget that may take more time to digest. D’Antoni said he devotes 75 percent of his practice on defense. Despite the Lakers’ apparent focus on this area, they have lacked horribly in actually showing any defensive strength on the court. The Kings’ XX points marked the sixth time in the past seven games they allowed opponents to crack the 100-point plateau.

The reasons sound awfully familiar. The Lakers left themselves exposed inside, allowing 60 points in the paint and getting outrebounded XX-XX. Some of this remains a by-product of D’Antoni’s preference for a small-ball lineup. But lots of it stems from the ongoing effort, rotation awareness and toughness that plagued the Lakers all season.

2. The Lakers’ offense ran like a well-oiled machine. The Lakers stayed competitive by posting numbers seemingly only possible on a video game with all the cheat codes activated. The Lakers posted a season-high XX points went XX of XX from the field (XX), XX from three-point range (XX) and featured six players cracking double digits in Jordan Farmar (XX), Jodie Meeks (XX), Pau Gasol (XX), MarShon Brooks (XX), Kent Bazemore (XX) and Wesley Johnson (XX). The Lakers’ third quarter output seemed more mind boggling, including 41 points on 14-of-19 shooting (71 percent) and 9-of-12 from three-point range (75 percent). The Lakers achieved such offensive euphoria for a number of reasons. They constantly moved the ball and spaced the floor.

The Lakers’ small-ball oriented lineup enabled them to maximize floor spacing and open three-pointers and layups for everyone. Such tenets then appeared to fuel the Lakers’ confidence and rhythm. Equate the Kings’ sub-par roster and a one-game suspension to star DeMarcus Cousins, and the Lakers appeared to have all the right ingredients needed for an offensively prolific game.

3. Jordan Farmar provided a career-high performance.
Safe to say his left hamstring feels fine. After playing conservatively ever since coming back from a strained left hamstring, Farmar put together a string of games showing he’s comfortable reverting back to his aggressive playmaking role. But Farmar pushed the accelerator to a five speed against Sacramento, posting a career-high 30 points on 9-of-14 shooting from the field and a 8-of-10 mark from three-point range. Farmar’s effort came at the perfect time considering Kendall Marshall’s scoreless performance reflects a rough stretch where he’s posted a combined seven points in the past five games.

4. Jodie Meeks continues to thrive.. After having marksmanship issues partly stemmed from a sprained right ankle, Meeks has returned offering incredibly prolific shooting. Meeks’ 22 points on 8-of-8 shooting and a 3-of-3 mark from three-point range. marked his fifth consecutive game he has posted double digits since healing his foot. During that stretch, Meeks has averaged 17.8 points on a 55 percent clip. Meeks’ shooting comes in waves, but he will always offer an honest effort. But on stretches where he’s unstoppable, the Lakers rightfully leaned on him.

5. MarShon Brooks provided his best game as a Laker.As he tries to cement his NBA future, Brooks compiled plenty of material for his resume tape. He converted a nifty reverse dunk. Brooks took a late-game charge. Marshall scored 23 points on 9-of-13 shooting and a 3-of-3 clip from the perimeter. Brooks thrived on offense without forcing the issue, an approach that enabled most of the Lakers to produce on offense with the same efficiency.

Nick Young unsure when he will return to the court