The idolatry Nick Young has for Kobe Bryant apparently goes beyond wanting to duplicate high-volume shooting, wearing a Lakers uniform or soaking in the Hollywood spotlight.

Young also seems determined to play through pain. He returned in only two weeks after nursing both a bone bruise and nondisplaced fracture in the patella of his left knee, and Young admitted that quick recovery time didn’t consist of taking an MRI.

Young sure didn’t look like it, posting a modest 10 points on 3-of-4 shooting in 19 minutes in the Lakers’ 108-102 loss Sunday to the Brooklyn Nets at Staples Center. Yet, Young dismissively said he won’t need to have any offseason treatment on his knee and that he’s not jeopardizing his body by returning so soon.

“I don’t believe there’s nothing broken or anything like that,” Young said. “It was swelling here or there.”
END_OF_DOCUMENT_TOKEN_TO_BE_REPLACED

1. The Lakers didn’t defend the perimeter well. The Lakers allowed Brooklyn to go 12-of-25 from 3-point range. Kendall Marshall hardly provided much in stopping Deron Williams, who scored 27 points on 9-of-16 shooting. Wesley Johnson hardly lived up to the hope he could defend bulkier players, letting Paul Pierce drop 25 points on a 9-of-17 clip and a 4-of-7 mark from three-point range.

2. Kent Bazemore continued to show promise. In his first start as a Lakers, Bazemore proved he’s not a one-hit wonder. It’s not so much impressive that he posted 17 points on 6-of-13 shooting in 30 minutes. It’s that Bazemore provided the same kind of energy that made him so impressive in his initial debut.

3. Nick Young played decent in his return, but didn’t take many shots. In his first game since missing the previous six because of a left knee injury, Young looked decent with 10 points on 3-of-4 shooting. But it’s head scratching that he took so few attempts. With the Lakers lacking shot creators, they need Young to generate more offense.

4. Ryan Kelly didn’t play. For the second consecutive game, the Lakers’ second-round rookie sat on the bench because of a month-long struggle where he’s shot only 36.9 percent from the field. The Lakers have gone through 29 different starting lineups this year. So it’s likely he’ll be given another chance. But for now, his role has been drastically reduced.

5. Jason Collins becomes officially because the first publicly gay player in the NBA. His performance itself hardly says much: zero points on one field-goal attempt, two rebounds and five fouls in 10 minutes. But Collins’ debut on a 10-day contract with Brooklyn marks a huge step on behalf of the gay and lesbian community. This marks the first time in 10 months Collins has played a game so it’s understandable he looks rusty. Expect him to shed that pretty quickly and provide the Nets with a dependable frontcourt reserve that can improve defensive rotations and provide hustle plays.

The pain in surrounding the bone bruise in Xavier Henry’s right knee has hurt so much that he hasn’t played in nearly two months.

But that didn’t stop him from fitting in a few dunks during his first two practice sessions this weekend that entailed everything except for full-court five-on-five drills.

“I can dunk. I jumped higher than most of these guys,” Henry said after Sunday’s shootaround in preparation for the Lakers’ game tonight at 6 p.m. against the Brooklyn Nets at Staples Center. “It feels good. It feels good right now.”

Don’t mistake Henry’s high-flying act as carelessness. Henry received medical clearance on Friday to resume all basketball activities after mostly performing non-weight bearing exercises while sitting out for the past 24 games. Lakers coach Mike D’Antoni also estimated Henry will advance to full-court five-on-five drills within the next week. Considering the Lakers plan to take Thursday off following a pair of road games in Indiana (Tuesday) and Memphis (Wednesday), the earliest that could take place would happen next weekend.

That leaves the possibility Henry could return as early as March 3 in Portland, though that obviously hinges on how his knee responds to the full-court five-on-five drills.

“It’s a process. I thought it was going to be faster than it has been,” Henry said. “But they’ve brought me here for a reason. Now it’s feeling a lot better. Hopefully soon I can play.”

The Lakers-Nets game tonight at 6 p.m. at Staples Center don’t have any playoff implications for the purple and gold. Very little will be made of the Lakers’ 29th starting lineup that features Kendall Marshall, Jodie Meeks, Kent Bazemore, Wesley Johnson and Pau Gasol other than perhaps themselves.

But there is something that will take place that has some big picture implications.

Jason Collins will suit up with the Brooklyn Nets in what will mark his first NBA game since publicly announcing in a Sports Illustrated article last May that he’s gay.

“I hope one day if a player can play, he can play,” Lakers coach Mike D’Antoni said. “If he can’t, he can’t. That’s all what we should be talking about. I know why we don’t. But eventually, that’s all that will matter. That’ll be a good thing.”
END_OF_DOCUMENT_TOKEN_TO_BE_REPLACED 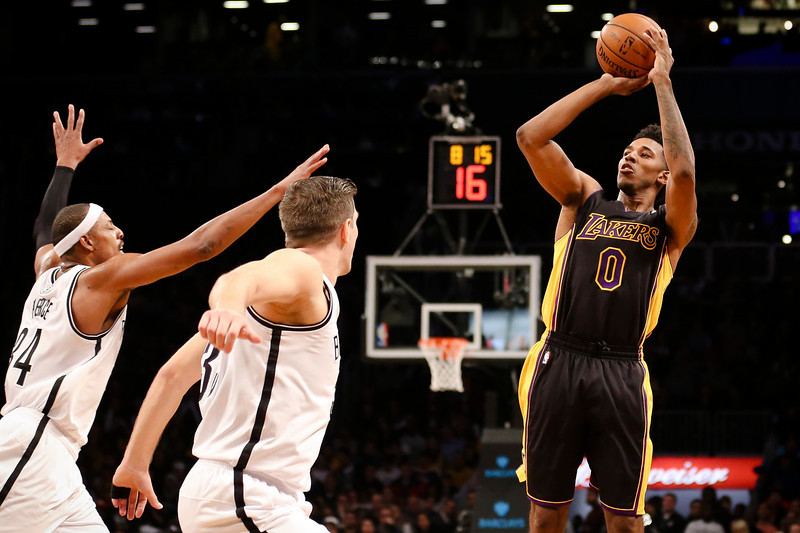 The swag. The high volume shooting. The never-ending highlight reels. The entertaining soundbites. And, yes, the occasional defense.

This all became a topic of discussion on Time Warner Cable’s Access SportsNet where host Kelli Tennant, analyst Dave Miller and I talked about Nick Young’s return tonight when the Lakers (19-36) hosts the Brooklyn Nets (25-28_ tonight at Staples Center at 6 p.m. He had missed the past six games because of a fractured left knee.

Nick Young’s agent stresses client “wants to be a Laker”

With the same confidence that he showed in a recent GQ Magazine shot, Nick Young offered some advice on how newcomers Kent Bazemore and MarShon Brooks can build off their impressive debut.

“Pass me the ball!,” Young playfully said before leaving the practice court.

But with Young returning Sunday when the Lakers host the Brooklyn Nets at Sunday (6 p.m.) since nursing a fractured left knee that kept him out for the past six games, Lakers coach Mike D’Antoni shared some different advice.

“He hit a little bit of a dip after an unbelievable start,” D’Antoni said. “Hopefully he’ll have a break he had and have the same energy defensively that he had. Nick can be really good and help us a lot.”

Defensive effort has always proven a knock on Young during his six-year NBA career. But the Lakers credited Young for making strides this season, averaging 16.9 points per game and showing such strong effort that he’s occasionally taken charges. What’s accounted for the change?

“I don’t’ know,” Young said. “You’ll see tomorrow. Mike has been on me all year with that. It’s had when you’re playing with seven guys. You have to conserve some energy somewhere.”
END_OF_DOCUMENT_TOKEN_TO_BE_REPLACED 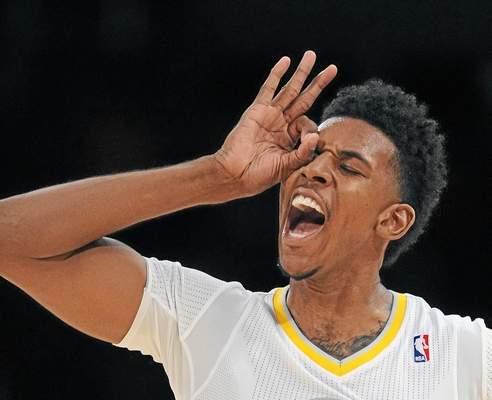 “Nick wants to be a Laker,” Bartelstein said. “But his focus right now is to get healthy, get back on the court soon and finish the rest of the season. That’s a conversation Mitch and I will have, but it’s too early at this point to talk about what he’s going to do.”
END_OF_DOCUMENT_TOKEN_TO_BE_REPLACED 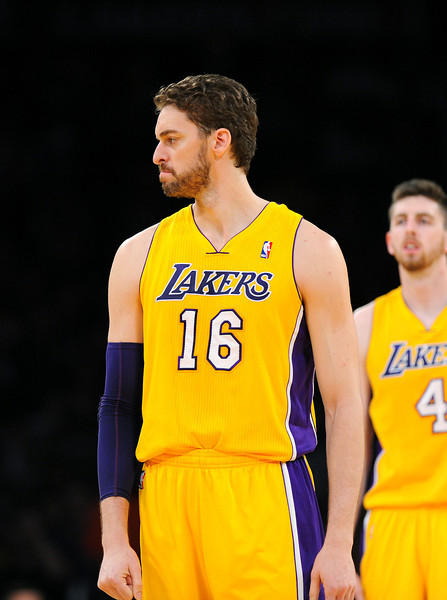 The Lakers’ Pau Gasol puts on his gameface as he returns to the starting lineup against the Celtics, Friday, February 21, 2014, at Staples Center. (Photo by Michael Owen Baker/L.A. Daily News)

The affection Pau Gasol and Kobe Bryant have for each other runs deep.

They combined to win two NBA championships together. Gasol remains grateful Bryant’s publicly advocated for him to stay on the Lakers and have a large post presence despite spending the past three seasons weathering endless trade rumors and reduced roles. Bryant remains grateful Gasol became the missing piece that helped him win two more NBA championships, both without Shaquille O’Neal no less. Gasol appreciates Bryant takes the burden in leading the team and sparks his aggressiveness. Bryant appreciates Gasol’s versatile skillset and accommodating personality complements Bryant’s scoring mantle and commanding demeanor.

So it’s only natural that Gasol sounded sensitive to the news that Bryant will be reevaluated in another three weeks after experiencing more pain, soreness and swelling in his fractured left knee.

“I know it’s tough for him. I know it’s a very tough year for him,” Gasol said following the Lakers’ 101-92 victory Friday over the Boston Celtics at Staples Center. “I just hope he gets healthy. If it takes a little longer, it takes a little longer. If that means he might not play this season, I’m sure he’ll stay positive and look ahead. The main thing is he has to be healthy.”
END_OF_DOCUMENT_TOKEN_TO_BE_REPLACED 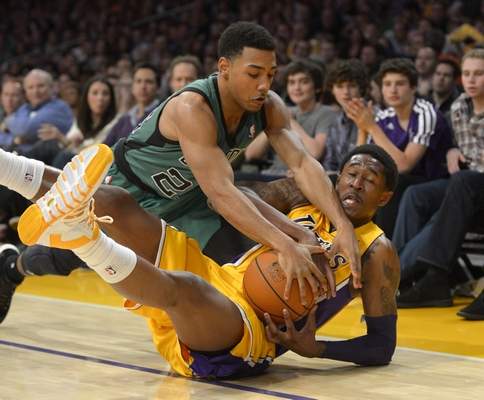 Below are five things to take from the Lakers’ 101-92 win Friday over the Boston Celtics at Staples Center:

1. Kent Bazemore and MarShon Brooks provided impressive introductions with the Lakers. Two days after remaining nothing more than seldom-used players with the Golden State Warriors, Bazemore and Brooks combined for 29 points on 12 of 21 shooting. OK, so it’s pretty presumptuous to think they immediately secured a long-term future with the Lakers. But they surely etched themselves into the rotation. Bazemore provided plenty of dependable hustle (jumping over the bench to chase the loose ball) and swag (throwing down three fingers after making a three-pointer). Brooks lived up to his morning shootaround vow that he remains both a dependable scorer and improved defender.

The Lakers hardly knew what to expect what both could provide after acquiring them in exchange for Steve Blake. But even with minimal practice time and NBA on-court experience, Bazemore and Brooks proved they’ll be a great fit for the Lakers.
END_OF_DOCUMENT_TOKEN_TO_BE_REPLACED

The Lakers ruled Bryant out for at least another three weeks after an examination with team doctor Steve Lombardo revealed Bryant has persisting pain, soreness and swelling in his fractured left knee. According to the Lakers’ latest timetable, Bryant will sit out for at least 10 more games before being reevaluated. But considering his latest rehab has solely entailed stationary bike work, Bryant will have to advance through basketball drills before returning to the court.
END_OF_DOCUMENT_TOKEN_TO_BE_REPLACED