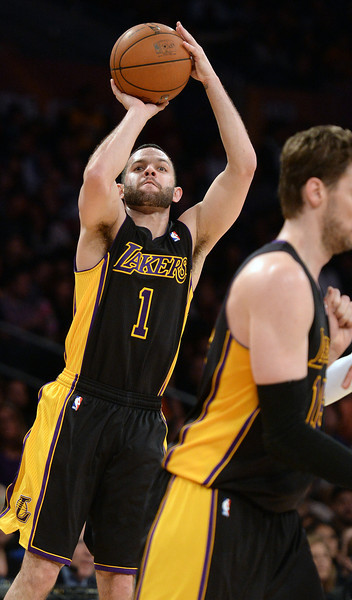 The Lakers’ Jordan Farmar #1 shoots during their game against the Kings at the Staples Center in Los Angeles February 28, 2014. (Photo by Hans Gutknecht/Los Angeles Daily News)

The strain in his left hamstring once kept Jordan Farmar sidelined and then cautious once he returned to the court. Suddenly, Farmar has pushed with plenty of aggressiveness. The head-scratching disappearing act from Kendall Marshall has continued. Luckily, Farmar emerged to camouflage the Lakers’ point guard issues. Farmar once seemed eager to leave the Lakers four years ago, believing Phil Jackson’s triangle offense and a continuous back-up role behind Derek Fisher stunted his growth. Eventually, Farmar sang a different tune on whether his career-high 30 points in the Lakers’ 126-122 win Friday over the Sacramento Kings should warrant him the team’s starting point guard spot.

“I don’t care,” Farmar said. “I don’t care, man. It’s just trying to play good basketball when I’m in there, have fun with whoever is out there on the floor with me.”

His 8 of 10 clip from three-point range both marked a career-high and contributed to the Lakers’ franchise record of three-point field goals made in a game (19 of 27), a figure Farmar called “pretty crazy.” Stemming back from their familiarity playing together with the Nets in the 2011-12 season, Farmar and Lakers’ newcomer MarShon Brooks reignited their chemistry. Brooks scored 11 of his season-high 23 points in the fourth quarter when he and Farmar played the entire period together in the backcourt. Meanwhile, Marshall’s scoreless effort reflects a rough stretch where he’s posted a combined seven points in the past five games. So glaring that D’Antoni joked beforehand that “it might have been a Mack Truck that hit him.” Yet, Farmar seamlessly filled in the gaps.

“The fans wouldn’t be too excited if both were struggling,” Lakers coach Mike D’Antoni said. “I know that much. You have to have a point guard who plays well. But Kendall will come back.”

In the meantime, have the Lakers found themselves in the equivalent of a quarterback controversy?

Farmar said he remains on a playing-time restriction under 30 minutes anyway, considering the sensitive nature to his hamstring injury. Farmar missed 10 games in December because of a torn left hamstring. But after returning Christmas Day against Miami, Farmar felt another tear in a different part of his hamstring New Year’s Eve against Milwaukee, a setback that sidelined him for an additional 16 games. Though Farmar scored 21 points in 33 minutes in the Lakers’ win Feb. 5 in Cleveland marking his first game back from injury, he sat out the next four games to stay cautious because of further hamstring tightness. Meanwhile, he walked away from about $3 million to continue playing overseas in Turkey while signing with the Lakers this offseason for about $1 million.

“You cant do anything about it. I’m a big believer that things happen for a reason. It’s part of the game. I’m not the first thing to get injured. I wont be the last,” said Farmar, before ticking off Kobe Bryant’s indefinite absence because of a fractured left leg and Derrick Rose’s persisting injuries that kept him out for most of two seasons. “You have to be mentally strong enough to get through those tough times and then bounce back.”

Farmar showed that maturity in a variety of ways.

With Pau Gasol questioning D’Antoni’s preference for smaller lineups and D’Antoni scoffing that Gasol made such critiques public, Farmar suggested a compromise at halftime of the Lakers’ game Wednesday in Memphis. Farmar encouraged the Lakers to play through Gasol in the post, which would both give him scoring chances and space the floor and provide open shooters for the Lakers’ perimeter players, two tenets D’Antoni values in his offense.

Farmar served as a key reserve in the Lakers’ two NBA championships in 2009 and 2010, and remembers vividly how Gasol’s post presence largely contributed to that success. Yet, Farmar never felt thrilled with Phil Jackson’s triangle offense and returned to the Lakers this season partly because D’Antoni’s faster-paced offense tapped more into his playmaking.

“We have a very young group. He’s not one of the young ones anymore,” Gasol said. “He feels like being the point guard and being somewhat of a veteran he feels comfortable to speak up and guys will listen.

And it’s all come at the right time.

“Just trying to have fun, man,” Farmar said. “It’s been a really tough year and trying to find some joy in the game and give us something to be proud and positive about — and the fans, as well.”