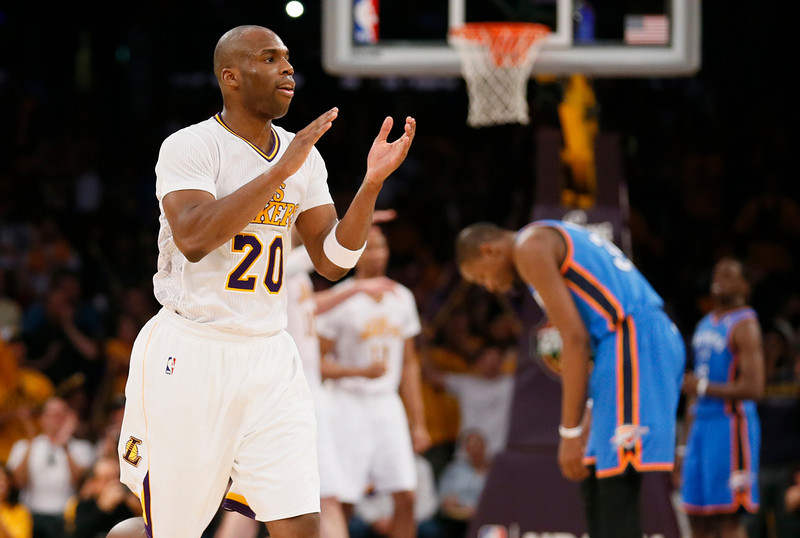 The Lakers have missed Kobe Bryant’s presence in every way imaginable. His countless game-winners. His ability to create his own shot. His ability to attract defenses that inevitably leave teammates open. His demanding leadership. Everything.

But in a season where everything has turned upside down partly because Bryant has sat out in all but six games because of persisting injuries, the Lakers’ unexpected 114-110 victory Sunday over the Oklahoma City Thunder at Staples Center still partly traces back to Bryant.

The Lakers leaned on a different point guard in Jodie Meeks, who posted career-highs in points (42) and free throws made (14 of 14), carried the team in overcoming an 18-point deficit and doing so with an attitude he adopted from Bryant.

“The biggest thing I’ve learned the most from Kobe is his mental approach to the game,” Meeks said afterwards. “No matter if we played last night, if he’s sick or hurt, he’s always ready to play. This year, I try to take that aspect in my game. No excuses. No matter how the season is going, go out there and play hard an give it your best effort.”

As a result, the Lakers pulled the unexpected in an already topsy-turvy week that featured an upset against Portland, the Lakers’ franchise worst 48-point loss to the Clippers and two more non-existent defensive showings in losses against New Orleans and Denver. The Lakers’ (22-42) euphoria afterwards in ending their three-game losing streak and knocking the Thunder (46-17) down a notch on its Western Conference perch could end by Thursday when the Lakers play them again on the road.

But with the Lakers’ playoff misfortunes and a high draft pick basically inevitable, Meeks has epitomized what the Lakers say how they want to treat the rest of the season. Provide some feel-good moments for themselves and fans. Remain competitive to ensure both a winning culture and stronger team development. Guard against padding individual stats for the sake of compiling a free agency demo reel. Follow all those ideals even if the losing persists.

Yet, Meeks remains the lone Laker that has actually fulfilled that job description. He’s averaged a career-high 15.3 points on 46.3 percent shooting because of more consistent outside shooting and an improved driving game. Meeks hustles on every possession and shows an honest effort in defending his opponent. He never whines or complains about his role.

“Jodie has been our most consistent performer all year,” Lakers coach Mike D’Antoni said. “It’s fun to watch somebody get better. He’s gotten better in a lot of phases of the game. The guy is playing. His personality is Jodie comes to work everyday and puts his hat on and does what he’s supposed to do. He’s getting some rewards for it.”

Meeks sure is, and it doesn’t just involve getting himself a chance to have perhaps a longer and more lucrative offer with the Lakers after his $1.55 million team option expires this offseason. Meeks also played a large part in the Lakers’ victory against the Thunder.

After trailing by as many as 18 points, Meeks led a third-quarter comeback by becoming the first Lakers player since Andrew Bynum four years ago to score 20 points in that time frame. Meeks provided basically everything. He sank a 27-foot three-pointer and then converted on a reverse layup in a 30-second span. A minute later, Meeks hit a 23-foot three-pointer and then converted on a three-point play by making both a fast-break layup and the ensuing foul shot. Meeks’ prolific shooting played a large part in ensuring a balanced offense that also included Pau Gasol (20 points), Jordan Farmar (12 points), Ryan Kelly (12 points), Wesley Johnson (11 points) and Kent Bazemore (11 points). As Meeks added afterwards, “I was trying to do anything I could to help us back in the game.”

“His offensive energy was outstanding,” Thunder coach Scott Brooks said. “He came off of screens, looked to score and attack. He got to the free throw line 14 times and got open shots in transition. A lot of our miscommunications, — when you do that to great shooters like that, you get punished.”

And that left the rest of the Thunder in a pretty dour mood.

“There’s nothing to talk about,” Oklahoma City guard and former UCLA product Russell Westbrook said when asked about Meeks’ performance.

Perhaps that’s because Meeks also defended Westbrook and helped limit him to a 7-of-23 mark from the field.

Oklahoma City didn’t have that luxury on Meeks.

Durant blamed that on the Thunder playing too high-up on its screen-and-roll coverages. As for the Lakers, well they have seen this from Meeks for most of this season.

“He’s a great shooter and he competes no matter what. He’s going to compete hard and give it everything he’s got. He’s always up for the challenge,” Gasol said. “He’s always aggressive. I think he tries to find his rhythm. Some nights he finds it and sometimes he doesn’t. Tonight was a game he found his rhythm … He’s consistent with his effort and attitude. He gets an opportunity to play every night because of his energy and effort.”

And because of that, the Lakers had the chance to experience an unexpected.

In much more dramatic moments, Bryant has offered that luxury plenty of times. Partly because of Bryant’s guidance, Meeks provided the same presence for one night.

“I try to tell myself it’s a fun game,” Meeks said. “Anytime you get a chance to play, it’s a privilege. I try to trickle that down to everybody on the team. Maybe the season hasn’t gone as planned. But we still have 18 games left. Play them hard and see what happens.”