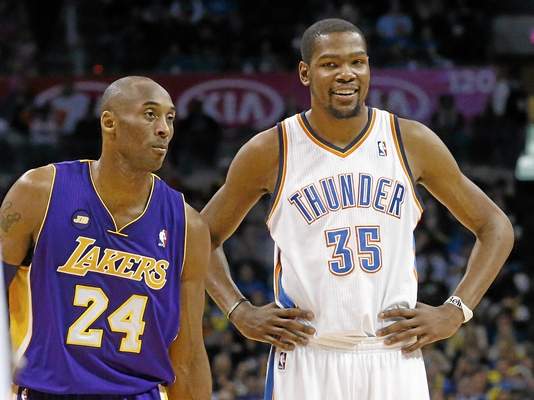 Below is a recent conversation I had with Thunder forward Kevin Durant, who talked extensively about his development and how Kobe Bryant’s mentorship shaped him.

When you look back at your seven year-NBA career, what do you think is the biggest area of growth?

“Just about winning. Being known as a winner. Of course, we haven’t won a championship, But when you play the Thunder, you know it’s not going to be an easy game. That’s what I enjoy the most, knowing that we have a chance to win every chance we step on the court. That’s what defines you as a players, the ability to win as a basketball game.

It’s all about determination and will. Team work and sacrifice. There will be ups and downs. But it’s about how you persevere through the tough times. There’s peaks and valleys in everything and it’s definitely an 82 game season. You’re going to see peaks and valleys. How you react to the valleys, calm and collected in the peaks. That’s what defines great teams with how you persevere.

How do you work on your game?

“Thinking the game more and working on my individual skills, ball handling, post ups and jump shooting. Just keeping the game fun. In the summer time, I play a lot of pick up and a lot of one-on-one just to keep the game fun and so I can react off of instincts. I play the game solely just off of how I feel out there and how the defense is playing me. I try not to be mechanical. That’s how my game has grown.”

Does any of that approach model anything after Kobe Bryant?

“Of course. He’s the greatest of all time. His skill is second to none. Him and MJ are neck and neck as far as skill. You can put in athleticism and be the best passer and strongest and quickest. But it’s about skill. I think that’s how his game is played. That’s why Kobe is the top two best ever in just having skill, footwork, shooting the three, shooting the pull up, posting up, dunking on guys and ball handling. It’s flat out skill. Him and Jordan are 1 and 1 a. They’re neck and neck as far as the skills are concerned.”

“Kobe plays his game no matter what with his intensity and focus and he will play to win. He also will do what he needs to do to get ready to play. If he sees a mismatch, he’ll take it down low and demand the ball. He’s one of those guys who will always bring the same intensity every time no matter who’s on the court.”

How would you compare yourself with Kobe on and off the court?

“Off the court, yeah, we’re different. On the court, we’re the same type of person I think. I think Kobe can appreciate that about me. I can tell. I’m going to go at him when I’m on the court. We’re going to throw elbows and talk trash. We’re going to talk [junk] to each other. I think he appreciates that’s how I play. I may be wrong. But I can sense when a guy has that mutual respect. I don’t give a damn who he is. He don’t give a damn who I am. We’re going to go at it. You can throw the names out the door. The guy in front of me, I will try to kick his [butt]. He’ll do the same with me.”

“He’s one of those guys that’s to himself and real quiet. That’s how it was being around the Olympics. He’s a great guy to talk to and somebody that I remember two years ago, I called him at like 3 in the morning. We both had a game the next day. I was picking his brain a little bit. He’s one of those guys who’s a night owl.”

What were you asking him?

“I was picking his brain about different situations in the game and how I can handle my teammates better and how I can approach the game a little better. I don’t think I told anybody that. But I texted him one night and said, Man I need to talk to somebody before playing the next day. It was three in the morning. He picked the phone up. That’s something I’ll always remember. When we play each other, it’s better now that we have that relationship because it was almost bragging rights.”

So giving what you’ve gone through with your scoring this year, what impressed you about what Kobe did back in his prime?

“What I did is not a fraction of what he did. What guys are doing now is nothing compared to what he did. Me, Carmelo, LeBron, Paul George, what we’ve done out there in this league is nothing compared to what Kobe did. A lot of people forget. We live in a world of what have you done for me lately. We don’t remember the day before sometimes. Think back five, six seven years ago with what he was doing, it’s unheard of.”

You said during All-Star weekend that you were tired of the comparisons between you and LeBron and the MVP talk. But do you at least appreciate that may show just how you fit in the history of the game?

I talked to Derek Fisher earlier and he saw similarities with you and Kobe with your versatility. What’s your approach in trying to make that a skill?

Being able to get out on the court and do anything, that’s what I try to pride myself on. In any situation, coach [Scott Brooks’ can keep me on the floor and I’m going to excel. Whether it’s playing small ball, being a point guard or playing a center, I’m trying to work on my game so I can be in the game during those situations so I’m trying to keep working and keep growing and get better at it.”

So beyond a championship, what’s the next step for you?

I don’t know what’s going to come in the next five minutes. I’m enjoying what I have now and just trying to grow. I watch and it may be a time I’m watching something in the game and I can see how I’m doing it better. I try to work on it again. I can’t tell you right now what I need to get better at. I’m so focused on today and working with what I have now. This offseason, I’ll sit back and watch what I can work at and get better at. I never try to pinpoint one thing. I’ll see how it works after that. My overall game needs a lot of work. I’m far from where I want to be.