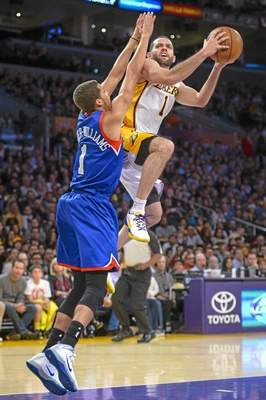 In this file photo, the Lakers´ Jordan Farmar goes up for two points as 76ers´ Michael Carter-Williams defends on the play during first half action at Staples Center on Sunday Dec. 29, 2013. (Photo by David Crane/Los Angeles Daily News file)

The Lakers cannot even go through a light practice without suffering another injury.

Lakers guard Jordan Farmar will stay sidelined for at least two weeks after an ultrasound and examination shows he has a moderate strain in his right groin. According to that timetable, Farmar would miss at least seven games and would not return until April 1 at the earliest against Portland at Staples Center. Farmar experienced pain during Monday’s practice, which was considered light and didn’t include any full-court, five-on-five drills.

“We were in the middle of a practice and he probably made a misstep,” Lakers coach Mike D’Antoni said. “I don’t think there was any one. He just strained it. I don’t know how he did it.”

D’Antoni sounded more definitive on how he will handle his diminished backcourt entering the Lakers’ (22-44) game Wednesday against the San Antonio Spurs (50-16) at Staples Center. He ruled out playing Steve Nash, who has missed the past 14 games amid persisting nerve irritation in his back and hamstring. Nash told this newspaper last week that he feels physically able to play. But the Lakers want to sit him out both to evaluate young prospects and to prevent Nash’s injury from worsening. Nash is under contract next season for $9.7 million, and the Lakers may avoid waiving him through the so-called stretch provision so his salary becomes completely wiped from the books following the 2014-15 campaign.

So instead, D’Antoni said he will rely on a flurry of young players, including starting point guard Kendall Marshall, shooting guard Jodie Meeks and small forwards Kent Bazemore and Xavier Henry.

“They’ll all probably play together,” D’Antoni said. “They will have to be able to rely on each other to bring it up and make plays. You have to move the ball and get Pau [Gasol] involved more. He has to be on the floor with those guys.”

Farmar has averaged a solid 10.3 points and 4.7 assists, but he missed a combined 30 games because of two separate tears in his left hamstring.