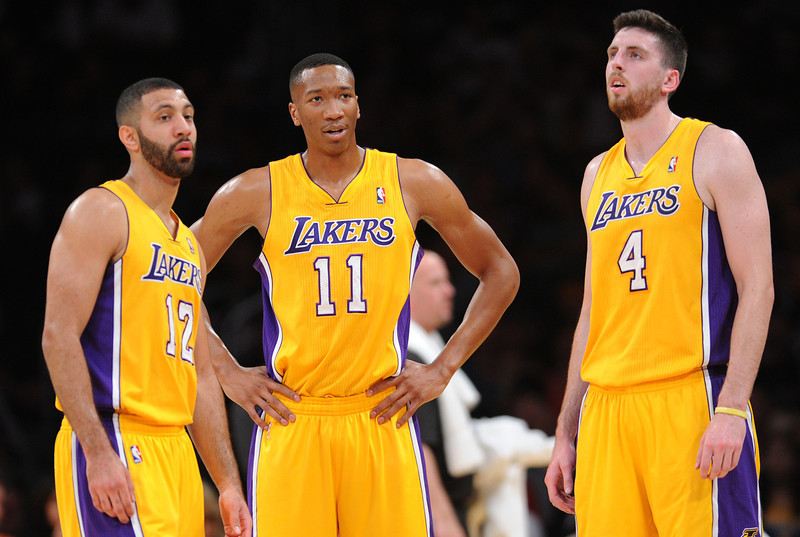 Below are five things to take away from Lakers’ 125-109 loss to the San Antonio Spurs at Staples Center:

1. The Lakers showed more energy Tout the benefits of having two days off and two days of practice before playing. Also account for the Lakers’ 34-point loss last week to San Antonio coming on the heels of the second night of a back-to-back against the Spurs. Both factors seemed to play a large spot in the Lakers showing more fluidity on offense, featuring a multitude of double-digit scorers including Xavier Henry (24) Pau Gasol (22), Ryan Kelly (14 points), Kent Bazemore (13 points), Jodie Meeks (11 points) and Kendall Marshall (10 points).


3. Xavier Henry broke out hot in the first half and then fizzled. His 19-first half points on 8-of-14 shooting featured everything that made him a pleasant surprise this season. He slashed to the basket with ease and even hit outside jumpers. But his five points in the second half showcased some elements that has plagued him since returning from a right knee injury that had kept him for sidelined games. Henry forced the issue on several of his 1-of-8 clip in the second half.

4. Gasol continues to impress offensively. His 22 points on 8 of 18 shooting and 10 rebounds marked the seventh time in the past nine games that he has logged at least 20 points. Gasol has ensured such play, thanks to improved health as well as the Lakers finding a balanced blend of pick-and-roll and post-up looks.

5. Robert Sacre posted a career-high in rebounds The Lakers didn’t have much defense with exception to Sacre grabbed 11 rebounds and continuously hustling on defense