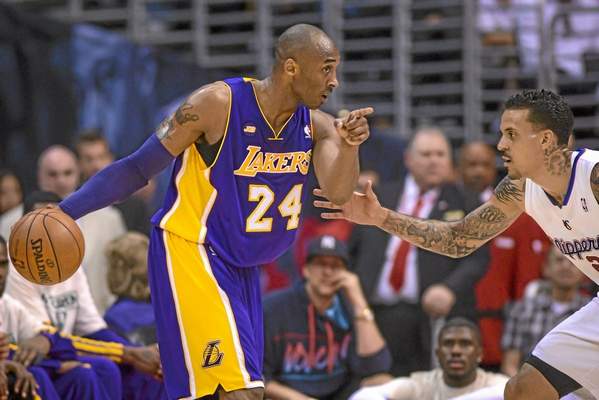 Kobe Bryant has missed nearly the entire 2013-14 season. His return to health is key to the Lakers’ immediate future. But it’s anyone’s guess whether he can overcome the latest injuries and be effictive again. Photo by David Crane/Staff Photographer

Kobe Bryant found himself under intense scrutiny, and it had nothing to do with recently criticizing the Lakers’ front office, whether he can heal from a fractured left knee or if he will ever win another NBA championship.

It had everything to do with what Bryant said in a recent profile penned in the New Yorker that included his reasoning on why he did not agree with the Miami Heat taking a team photo where they are all wearing hoodies last year, a form of protest to commemorate 17-year-old Trayvon Martin being shot by George Zimmerman despite remaining unarmed and only wearing a hoodie in his Florida neighborhood.

“I won’t react to something just because I’m supposed to, because I’m an African-American,” Bryant is quoted as saying in the New Yorker piece. “That argument doesn’t make any sense to me. So we want to advance as a society and a culture, but, say, if something happens to an African-American we immediately come to his defense? Yet you want to talk about how far we’ve progressed as a society? Well, we’ve progressed as a society, then don’t jump to somebody’s defense just because they’re African-American. You sit and you listen to the facts just like you would in any other situation, right? So I won’t assert myself.”

Bryant’s comments immediately sparked criticism on social media for the apparent insincerity surrounding Martin’s case and the racial components that may have led toward becoming a wrongful death. Civil rights activist Najee Ali, director of Project Islamic H.O.P.E., said in a statement that the public should boycott any Bryant-related merchandise and endorsements.

Two days after Zimmerman was acquitted of murder charges, however, Bryant posted on his Instagram account disgust with the verdict by quoting civil rights activist Frederick Douglass.

“Where justice is denied, where poverty is enforced, where ignorance prevails,” Douglass once wrote, “and where any one class is made to feel that society is an organized conspiracy to oppress, rob and degrade them, neither persons nor property will be safe.”

Still, Bryant dispatched a series of tweets and even had a phone conversation with syndicated columnist and commentator Roland Martin to clarify his stance.

Travon Martin was wronged THATS my opinion and thats what I believe the FACTS showed. The system did not work #myopinion #tweetURthoughts

Amid the controversy over Bryant’s subsequent statements and his clarifications, it appears that the Lakers star strongly believes that Martin was wrongfully killed and that Zimmerman should have been punished in the court of law. But because of the initial storyline continuously evolving, Bryant believed the Heat’s prompt solidarity of support appeared premature.

Incidentally, Bryant received criticism from former NFL Hall of Famer Jim Brown earlier this season out of belief that he has failed to lead the cause in becoming vocal on civil rights issues.

“He is somewhat confused about (African-American culture) because he was brought up in another country. He doesn’t quite fit what’s happening in America,” Brown said on the Arsenio Hall Show. “In the days when we had a summit and we called the top black athletes together to talk to Muhammad Ali about his status with the armed forces, there were some athletes we didn’t call. If I had to call that summit all over, there would be some athletes I wouldn’t call. Kobe would be one of them.”

Bryant’s latest words sparked another conversation, but clearly not one he had originally envisioned.

Loss to Bucks just another low in Lakers’ season of lows