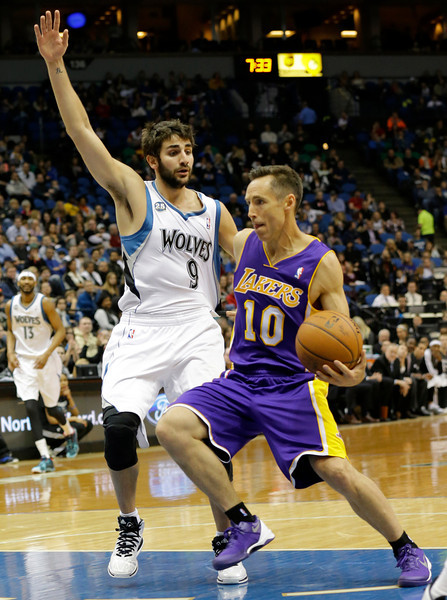 MINNEAPOLIS — Only two days beforehand, Steve Nash considered his back so painful that he would not even try to play on the Lakers’ two-game trip.

The concerns no longer rested on whether his body could sustain the physical wear and tear. Instead, the nerve irritation became so bothersome that his workload reduced toward nothing more than spot-up shooting drills.

Yet, there Nash was on the court in the Lakers’ 143-107 loss Friday to the Minnesota Timberwolves where he posted five points on two of five shooting and six assists in 15 minutes. Both the game and Nash’s stat line proved meaningless, but his on-court presence revealed everything about how he’s still finding purpose in a lost season.

“A guy that wants to play,” Lakers coach Mike D’Antoni was how he described his 40-year-old point guard. “Obviously he will be rusty and everything. We’ll have to keep monitoring that going forward.”

For once, that progress did not entail Nash making any turns for the worse.

“I wasn’t totally pain free, but I didn’t have one of those, obviously, setbacks that are kind of debilitating,” Nash said. “So, we’ll see. Hopefully I can play again.”

He reported feeling healthy enough to play. The Lakers suffered an additional injury with Xavier Henry sitting out because of increased soreness in his right knee, an injury that has sidelined him for 28 other games this season. Lakers guard Jordan Farmar plans to get reevaluated this weekend in hopes to return late next week after missing the previous six games because of a strained right groin. The Lakers had originally shut Nash down earlier this month in part because they wanted Kendall Marshall and Farmar to have significant minutes so they could properly evaluate how they fit into their long-term plans.

“Frankly I don’t know if I’ll play again or if I play every game (the rest) of the year,” said Nash, his status for the Lakers game Sunday against Phoenix at Staples center an unknown. “The bottom line is right now is this is a situation where I want to play, that’s the only reason I played tonight, but I also want to go into this summer healthy.”

The Lakers ensured Nash did not compromise that goal by taking a pretty conservative approach with his minutes. D’Antoni said he and the training staff haven’t devised a minute limitation on Nash, arguing that any setback hinges more on his body and on-court circumstances than the amount of playing time. Still, with Nash tweaking his back two weeks ago against the Washington Wizards, D’Antoni sounded cognizant about playing things safe.

“He felt great and he wanted to play some more,” D’Antoni said. “But I said, ‘Look, you feel great. You may as well quit now. I feel bad taking you out.’ Hopefully he can build on this.”

But as with everything that has happened with Nash this season, nothing appears certain as the Lakers (24-48) still have 10 games left before this disappointing season ends. He has appeared in only 12 games, averaging 7.1 points on 36.9 percent shooting and 5.3 assists in 21.6 minutes. Yet, amid a lost season where the only remaining variable entails how each player carves out his NBA future, Nash remains determined to solidify his.

It remains an interesting dynamic. Nash’s resume entails two MVP awards and a fourth-place standing on the NBA’s all-time assist list while most of the Lakers’ roster has yet to have a secure NBA future. Yet, at times, Nash seems to show more urgency in giving the Lakers less reason to waive his $9.7 million contract this offseason through the stretch provision than the crop of castoff role players have shown in carving out a role.

“You might not see me the rest of the year, or I might get a chance to play a bunch,” Nash said. “But with Jordan coming back and the state of the team, it’s totally in flux. We’ll just see. I think the most important thing, like I said, is for me to start the offseason somewhat healthy and for these guys to play as much as they can. They’re free agents and I think the club needs to take a look as well.”