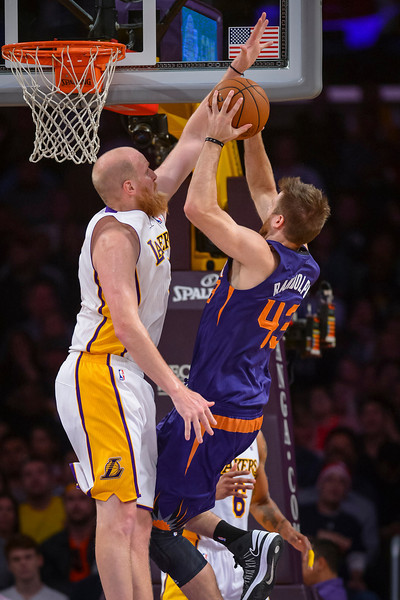 Below are five things to take from the Lakers’ 115-99 victory over the Phoenix Suns Sunday at Staples Center:

1. Chris Kaman seemed unstoppable. He unloaded a season’s worth of frustration stemmed from a reduced role, numerous injuries and persistent losing and channeled it into a pretty dominant performance. So dominant that Kaman’s 28 points on 13 of 17 shooting and 17 rebounds nearly matched his career high 29 points set with the Clippers against the Houston Rockets on Dec. 22, 2009.

The irony of this development seems too striking. Kaman cemented an eight-year career with the Clippers that included an All-Star game appearance the same season he set his previous career high in points. Kaman has called this year the most frustrating of his 11-year career for obvious reasons. He came here on a mini mid-level deal worth $3.2 million believing the Lakers would use him as a worthy consolation prize toward losing Dwight Howard. Instead, Kaman has mostly found himself toiling on the Lakers’ bench. He’s also only two days removed from playing the first five minutes of the Lakers’ 143-107 loss Friday to Minnesota, a stretch that featured shaky defense on Nikola Pekovic.

But against Phoenix, Kaman unleashed everything that made him such a valuable signing. He canned mid-range jumpers and putbacks. Kaman played a solid pick-and-roll game besides an erroneous moving screen call that also sparked a technical foul. Kaman’s season-long weakness on defense relatively improved too. All of this elation could die down as quickly as Tuesday against Portland, especially against Pau Gasol. But for Kaman’s sake, he provided a showcase game worthy to appear on his free agency resume tape.

2. The Lakers defense improved. No one will mistake the Lakers as the 1980’s Detroit Pistons or the 1990’s New York Knicks, two teams that bullied and intimidated opponents with their bruising strength and toughness. But after spending their recent two-game trip not showing a lick of effort in this area, the Lakers channeled the same defensive energy that ensured recent home wins against Orlando and New York as well as another round of free tacos.

The Lakers held Phoenix to a 38.9 percent clip from the field, including a surprising 7-of-25 combined mark from the Suns’ talented backcourt in Goran Dragic and Eric Bledsoe. The Lakers limited their turnovers, which helped tamper down on issues surrounding transition defense. The Lakers’ crisp ball movement (29 assists on 53 field goals) channeled added focus on the other end.

By and large, the Lakers are a defensively flawed team. They lack a consistent rim protector. Even though they feature bouts of speed and athleticism, the Lakers usually lack enough strength in those areas against other young NBA teams. But the Lakers can offset those disadvantages through pretty simple concepts, including better shot selection and ball handling, stronger communication and effort. The formula worked against Phoenix, which also took way too many outside shots just because they were open. But in the remaining nine games, the Lakers have yet to prove they can showcase such a mindset consistently.


3. Jodie Meeks remains a beacon of consistency. With nothing more than a sharp shooting stroke, never-ending hustle and sharp defensive awareness, Meeks’ 22 points on 6 of 9 shooting marked his 11th consecutive game that he has posted double digits. Meeks has shown marked improvement from last season by diversifying his shooting and finishing better at the rim. But much credit for his ability to absorb heavy minutes stems from his improved diet and his willingness to work hard regardless of the circumstances.

4. Kent Bazemore’s passing game improved. D’Antoni has loved Bazemore’s energy, but recently instructed him to limit his tendency to go one-on-one. Bazemore has listened. His 12 points and six assists marked the fifth consecutive game he has had more than one assist, showing he has channeled his mindset into producing more within the offense than solely relying on his energy.

Bazemore seemed to have pure intentions. But his first month with the Lakers often entailed him solely driving to the rim, taking outside shots and going one-on-one. The Lakers are not opposed to that, but sometimes those tendencies came at the expense of crisp ball movement. It appears Bazemore has carved out a better balance.

5. The Lakers continue to field a flurry of injuries. Both Pau Gasol (vertigo), Steve Nash (nerve irritation in back), Xavier Henry (sore right knee) and Jordan Farmar (strained right groin) sat out, though this injured list might shrink soon. The Lakers believe Henryl will return Tuesday against Portland after missing the past two games because of increased pain in his knee. Gasol has sat the past four games, but his symptoms improved enough for him to complete a cardio workout and sit on the Lakers’ bench in street clothes. The Lakers plan to evaluate Farmar on Friday, though D’Antoni expects he will not return until a week later at the earliest. Nash, as he has all season, remains day-to-day.