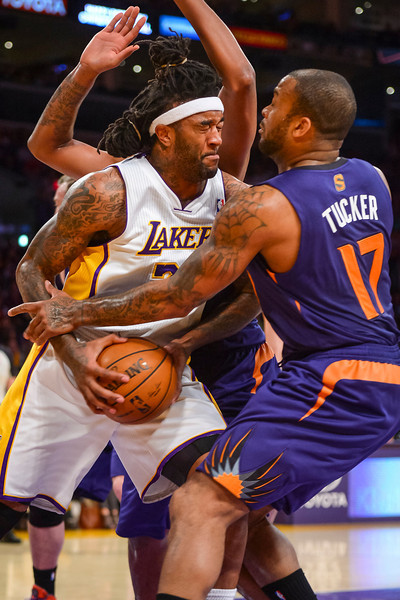 Through all the missed defensive rotations, the absent rim protection and a missing source of energy, Jordan Hill sat on the bench without any chance to fill those needs.

Lakers coach Mike D’Antoni gave Chris Kaman and Pau Gasol a chance to start together in the team’s 124-112 loss Tuesday to the Portland Trail Blazers, but the sudden willingness of faith both exposed the tandem’s rustiness and left Hill among the few falling out of the rotation.

“It gets old,” Hill said, mindful he had posted 28 points in Milwaukee just five days earlier. “It’s what you can expect, though. It’s not a surprise. I can’t do nothing, but stay humble and continue to keep my head high and support my team.”

Yet, it appears clear that Hill has no interest in filling that role long-term. He said “it’s too early to say” on where he would like to play once he becomes an unrestricted free agent this summer. Hill also called the Lakers “the best franchise in the NBA.” Though he did not rule out returning to the Lakers next season, Hill made it clear he has no interest in doing so if it means having a similar role.

Hill did not explicitly say it. But if D’Antoni were to return to coach, that surely cements Hill’s interest in leaving. He has averaged a solid 8.8 points and 7.1 rebounds in 19.8 minutes this season. But his playing time has waned this season for reasons including fatigue, a recent knee injury and becoming a casualty of D’Antoni’s system that puts a high premium on floor spacers and outside shooters.

Hill’s absence against Portland reflected the byproduct of D’Antoni featuring Gasol and Kaman in the frontcourt while still giving playing time to Ryan Kelly (nine points and nine rebounds in 20 minutes) and Robert Sacre (three points and six rebounds in 18 minutes).

“There’s not enough minutes,” D’Antoni said. “You look at the minutes. To give them ample opportunities, you have to have some minutes. You can’t just play 12 guys and be in and out, in and out, in and out. That just doesn’t work. You have to make choices. You don’t know beforehand if it’s the right choice. You probably know afterwards. You just go on your gut and go on what you see from previous games and go on the opponent and try to make the best choice you can.”

Hill hardly liked that reality. But he stressed that his frustrations stemmed more from not having a chance to contribute than any issues with D’Antoni.

“I didn’t really see it coming. But I still wasn’t surprised,” Hill said. “The rotation has been up and down. Mike is an excellent dude and he is our coach. You have to show the utmost respect for him and for what he’s doing. I like this team and everybody on this team. So I’ll be supportive.”

Hill said he has that mindset partly because it appears inevitable he will return again to the court. After all, the Lakers have fielded 33 different starting lineups amid endless injuries and inconsistent play.

“It’s been like this for the whole season,” Hill said. “It shouldn’t a surprise to anyone. You have to stay strong basically.”

Yet, it’s a role Hill has no interest in playing wherever he goes next season.