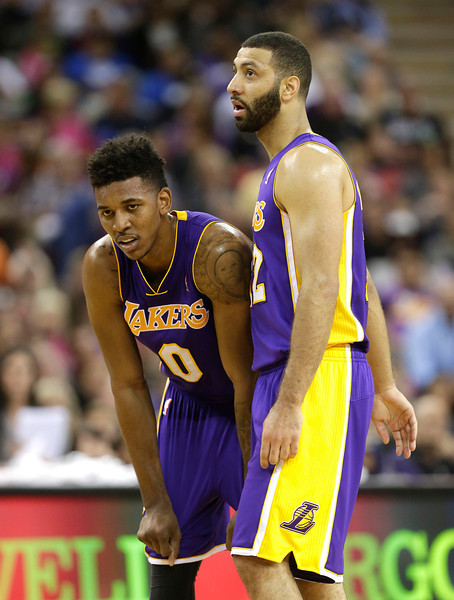 Lakers forward Nick Young will likely opt out of his $1.22 million player option. But he said he is “very confident” he will reach an agreement to stay with the Lakers

A hefty offseason project awaits the Lakers, but it appears they may one measure of clarity surrounding at least one roster spot.

Lakers forward Nick Young said that he’s “very confident” that he will stay with the Lakers even though he plans to opt out of his $1.22 million option.

“I think we’ll come to some kind of agreement,” Young said Thursday after practice. “Hopefully it happens. We’ll have to see what they’re going to do. I know Kobe’s going to want something.”

Young was making a light off-hand remark on how Bryant expressed impatience with the front office last month, worried that they will not put the necessary energy to construct a championship caliber roster. Young has become one of the Lakers’ few bright spots this season, posting career-highs in points (17.8), minutes played (28.2) as well as a relatively improved effort on defense. But Young will likely command something more lucrative than the $1.22 million he would earn should he exercise his player option. Though Young publicly has refused he will do such a thing, he’s expected to do so in hopes of securing a longer and more lucrative deal.

Young said that his agent, Mark Bartelstein, and Lakers general manager Mitch Kupchak will have to iron out specifics. But when asked if will be hard to pass up a chance on receiving a hefty pay raise, Young said, “it depends if it’s close enough.”

“Obviously I always wanted to be a Laker,” said Young, a former Cleveland High and USC product. “This would be a dream come true to still be here. But it’s crazy. You never know what happens. Last year they had a whole different team. Obviously they’ll make some changes.”

The Lakers will have up to 12 of their 15 players become free agents in July, leaving Kobe Bryant, Steve Nash and Robert Sacre as the sole players under contract for the 2014-15 season.

That’s why Young conceded the uncertainty that the Lakers’ two-game homestand against Golden State (Friday) and Memphis (Sunday) may mark his last time at Staples Center wearing a purple and gold uniform, leaving him to order extra tickets for friends and family.

Young relished rehashing how Kobe Bryant has become a mentor for him in film study, diversifying his scoring and showing better defensive effort. He sounded thrilled about this season playing in front of close ones, eating homecooked meals and becoming a fan favorite. Young shared that he often dreams about giving a speech at a Lakers championship parade, referencing Shaquille O’Neal’s infamous “Can you dig it” chants. Young also expressed confidence the Lakers will rebuild quickly enough to become a title contender again.

“This is home. I would be glad to finish off here as a Laker,” Young said. “My kids go to school and can say my dad was a Laker. That’s big.”