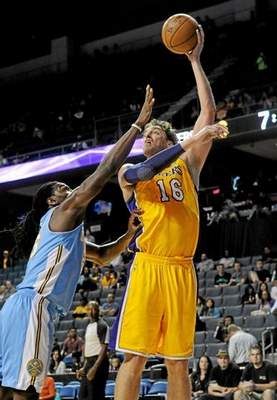 The numbers just don’t add up.

Pau Gasol will sit out when the Lakers (25-53) host the Golden State Warriors (48-30) on Friday at Staples Center because of vertigo, an ailment that has sidelined him for eight of the past nine games. Gasol completed an individual workout on Thursday, but he has yet to receive medical clearance.

The Lakers play their final home game on Sunday against Memphis before a string of road games in Utah (Monday) and San Antonio (Wednesday). They also currently only have one more practice scheduled on Saturday. So it’s fair to say Gasol won’t play again this season, no?

“That’s common sense. They’ll talk,” Lakers coach Mike D’Antoni said. “I’m with you. I don’t have an answer for you.”

D’Antoni then referred to Lakers trainer Gary Vitti and Gasol.

“I’ve heard he wants to play,” D’Antoni said, “but he hasn’t been cleared yet.”

The Lakers haven’t lost a season series to Golden State since the 1994-95 season, a realistic prospect considering they lost both games in Oakland by an average of 25 points. Yet, the Lakers beat Golden State in Novemeber amid a much healthier roster.

With nothing else to play for beyond a flurry of role players showcasing their worth once they become free agents this offseason, the Lakers are touting themselves as potential spoilers. Golden State holds only a one-game lead over Phoenix (47-31) for the Western Conference’s sixth playoff spot.

“That puts some intrigue into it,” D’Antoni said. “The biggest thing is to go out, compete, have fun and get better and see if we can mess somebody up. That should be our motivation.”