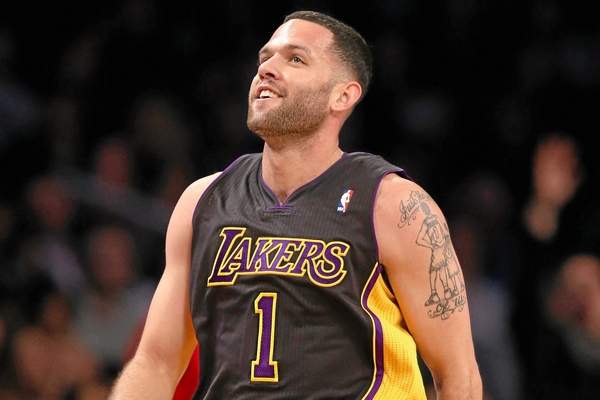 Jordan Farmar took a substantial paycut to return to the Lakers. He experienced a season filled with injuries and losing. The Lakers enter this offseason laced with uncertainty on how long it will take to return to championship contention.

Yet, Farmar reiterated in unequivocal terms following the Lakers’ 102-90 loss Sunday to the Memphis Grizzlies at Staples Center that he wants to stay with the purple and gold.

Of course, I’d be a Laker,” Farmar said. “And if I was [General Manager] Mitch [Kupchak], I would sign me.”

The Lakers like Farmar, impressed that he posted 10.3 points and 4.8 assists despite playing in only 39 games because of two separately torn left hamstring and a strained right groin. The Lakers are also impressed with Farmar’s maturity since his first stint here in 2006-10, providing an assertive leadership presence and team-first mindset.

Still, Farmar’s future partly hinges on who the Lakers draft, what free agents they can attract and what kind of offers Farmar fields elsewhere.

“It wouldn’t be ideal but it’s part of our business. We can’t control that,” he said. “I’ll sit down with Mitch and the guys, and see if something can be worked out.”

It remains to be seen if things work out for the Lakers.

They have serious injuries to Kobe Bryant (fractured left knee) and Steve Nash (nerve irritation in back) without any assurances their body won’t break down again next season. The Lakers are currently mulling whether they retain coach Mike D’Antoni. Even though up to 12 of their 15 players come off the books and a first-round pick, the Lakers only have enough cap room to acquire a max-level free agent over the next two years.

But Farmar expressed optimism over the Lakers’ rebuilding approach.

“I’m a Laker. I’ve been through the best of times, the worst of times. It’s all part of it. I feel it. It’s home. I’m cool with that,” he said. “I think the Lakers organization will be OK in the long run and I’m proud to be part of history.”

Time will tell if that history extends into the future.

Lakers lose seventh in a row, this time to Memphis