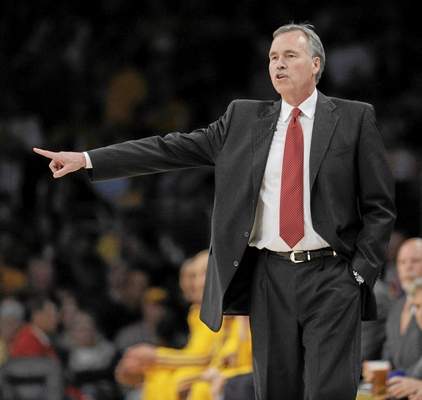 Laker coach Mike D’Antoni shouts instructions during the first quarter against the Houston Rockets in the final home game of the year at Staples Center. (John McCoy/Staff Photographer)

SAN ANTONIO — Mike D’Antoni sat in a chair here along the court at AT&T Center appearing fully relaxed. But he also sounded fully aware that this might be it.

The Lakers (26-55) play their season-finale here on Wednesday against the San Antonio Spurs (62-19), ending what will mark the team’s worst record in franchise history since moving to Los Angeles 54 years ago. But will that also mark the end of D’Antoni’s tenure here?

He might have some answers soon when the Lakers’ exit meetings take place on Thursday and Friday.

“The next step would be to sit down with Jim [Buss] and Mitch [Kupchak] at the end of the year, talking things out,” D’Antoni said, referring to the Lakers’ front office members. We’ll see where things are and decisions will be made going forward about a million things. We’ll go with whatever is decided.”

One of those things will involve D’Antoni’s future, who hasn’t been given assurances one way or the other on whether he will return next season. The Lakers are leaning toward retaining him, mindful that he will be owed $4 million and a firing would lead to a coaching carousal that has entailed four coaches in the past five years. But the Lakers won’t make any plans until going through that evaluation process. Though the Lakers are expected to make a decision well before the NBA draft in late June, it’s not currently clear when D’Antoni’s standing will be finalized.

“There’s been no agreements in the sense we haven’t talked,” D’Antoni said. “We’ll talk in the next couple of days and we’ll see.”

The Lakers have plenty of other decisions to make, including what to do with their 12 pending free agents, who they will draft with their first-round pick and to what degree they should pursue other free agents.

Such uncertainty has hovered over the Lakers season like a dark cloud, one filled with a depleted roster that missed a combined 305 games because of injuries. It also entailed the Lakers relying on a flurry of a castoff players unaccustomed toward having a big role. Case in point, Kobe Bryant (fractured left knee), Steve Nash (nerve irritation in back), Pau Gasol (vertigo), Chris Kaman (strained right calf), Xavier Henry (torn ligament in left knee, bone bruise in right knee) and Kent Bazemore (torn tendon in right foot) remain sidelined.

“It’s not fair to them. To me that’s where the season went sideways,” D’Antoni said. “I thought the guys played hard all the way through and tried to be competitive as much as they could. A couple of nights, it didn’t happen. But I can’t fault their effort or mental approach to the game.”

“They’re professional and stay together,” D’Antoni said. “Everybody is in the same boat and wants to look good. You don’t look good if you scatter, don’t play hard and play together. They understood that and they did their job. They came in without much support. There wasn’t any. They banded among themselves and tried to do the best they could.”

The Lakers’ locker room remains divided on D’Antoni, with Bryant and Gasol the most prominent critics for his fast-paced system and small-ball philosophy. But plenty of the Lakers’ role players appreciate D’Antoni granting them opportunities and ability to grow. Nick Young, for one, came to his defense for the cards he was dealt.

“He handled everything well. He came into a bad situation getting picked over Phil Jackson,” said Young, referring to the former Lakers coach who won five of his 11 NBA titles here. “He already had a target on his back. He handled that well with people booing and saying ‘Fire D’Antoni.’ He still comes to work with a smile.”

There’s been other trying times.

Last season, D’Antoni had no training camp, coached a team that experienced significant injuries to Nash and Bryant and struggled handling various personality conflicts. Both Dwight Howard and Gasol felt marginalized as big men, while Howard remained frustrated with Bryant’s dominating personality. The Lakers’ veteran-laden roster struggled playing his fast-paced system before enough concessions were made on both sides to finish out the season with a 28-12 record. The Lakers still lost in a first-round sweep to the Spurs amid injuries to Bryant and Nash.

“Last year was better because you legitimately had a shot to win every night,” D’Antoni said. “Sometimes you’re up against no matter how good you play and things went, you didn’t have a shot to win a lot of times.”

Yet, D’Antoni said he still holds this season in high regards, namely for seeing his players both nurture a positive attitude and develop amid trying circumstances.

“Any season you remember about the relationships. Wins and losses, you remember, especially if you won a championship,” said D’Antoni before highlighting an interesting analogy. “But you remember things like it’s almost like Christmas. Once you open your presents, you don’t remember your presents you got. Most of it is the parties, the relationships with your parents going up to it and the anticipation of Christmas. In that aspect, I remember some great memories with guys and moments we had.”

Will such sentimentality be enough for an organization that holds its standard toward bottom-line results? Only time will tell.