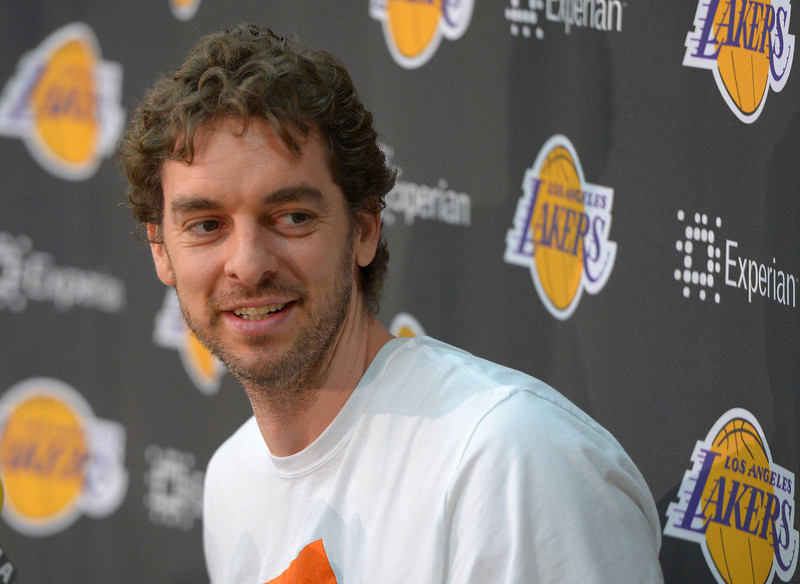 A key Lakers star has pressed on the organization to make “significant changes.”

His name is not Kobe Bryant. His name is Pau Gasol, who will become a free agent in July and could leave the Lakers on his own after pleading endlessly for them to keep him the past three years amid never-ending trade rumors.

“Re-signing for the Lakers is a possibility, but I’m not sure whether to say it’s a remote one,” Gasol wrote Wednesday on his personal Web site. “If there’s anything or anyone who could make me stay it’s Kobe Bryant. I’d stay for him, but there’d have to be significant changes. I’ve said it many times: I want to be in a team that has a solid chance to win another tournament and where I can be an important factor in the game.”

Gasol also reiterated his philosophical differences with coach Mike D’Antoni. Gasol prefers to play a post-oriented offense at a methodical pace, while D’Antoni has wanted to feature Gasol more in pick-and-roll situations and as a facilitator in a faster-paced offense.

“I’ve never concealed the fact that D’Antoni’s style doesn’t suit my game,” Gasol wrote. “Everybody knows this. I don’t know if my decision will be swayed by whether Mike stays or leaves. Obviously, the coach is a very important factor for any team.”

Gasol recently made such comments last Thursday in his exit interview, conceding it would “kind of difficult” for the Lakers to rebuild a championship-caliber roster after ending the 2013-14 season with a 27-55 record, their worst mark in L.A. franchise history.

The Lakers have plenty of purchasing power with Bryant ($23.5 million), Steve Nash ($9.8 million) and Robert Sacre ($915,243), but Lakers general manager Mitch Kupchak has suggested the possibility he will spend conservatively. It’s possible neither LeBron James (considered longshot) nor Carmelo Anthony (not interested) opt out of their contract. The 2015 class features more talent, including Minnesota’s Kevin Love.

Kupchak said last week “there’s great interest in re-signing Pau.” But Gasol is unlikely to make the $19.3 million he made this season. Gasol’s future with the Lakers also hinges on who they draft with their first-round pick and who else becomes available on the open market.

“Money isn’t important to me,” Gasol wrote. “I have other priorities. A contract lasting several seasons, the make-up of the team that signs me: I’ll need to think long and hard. I won’t just go to the franchise that offers me the biggest salary, I know that.”

Gasol averaged 17.4 points on 48 percent shooting, but his defense looked shaky and he played only 60 games because of a variety of ailments. That included a surprising bout of vertigo, which kept Gasol out 12 of the last 13 games of the season. Gasol reported improvement, but wrote he has not started training yet. Still, Gasol plans to play for his native Spain in the 2014 World Cup of Basketball, which takes place from Aug. 30 to Sept. 14 in Spain.

Gasol mostly cited the Lakers’ struggles to the combined 319 games missed due to injury, calling it “our poor health the main enemy.”

“It’s been very difficult for the coaches too,” Gasol said. “They’ve had to be really patient to handle all these injuries. And they deserve credit for that. But it has obviously damaged the team and we can’t hide it. We’re all responsible for it.”

And unless things drastically change, Gasol’s time with the Lakers might be over.
RELATED: