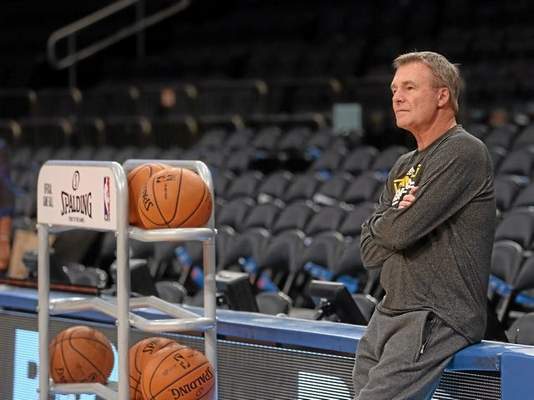 Multiple media outlets reported, first by WSAZ-TV’s Keith Morehouse, that D’Antoni will coach the Thundering Herd after they recently fired Tom Herrion amid a 67-67 record through four seasons before the news became official.

The news somewhat caught D’Antoni by surprise, namely because he is flying Thursday to Marshall (in Huntington, W.Va.) where he planned to have an in-person interview. Presuming that interview went well, he was expected to be named the head coach. But D’Antoni’s phone interview on Wednesday impressed Marshall enough to make the announcement earlier. He will have a formal press conference on Friday.

Marshall had included Lakers coach Mike D’Antoni, who is Dan’s brother, as a possible candidate. Although Mike felt flattered by the interest by his alma mater, he prefers staying with the Lakers for obvious reasons. Mike D’Antoni’s future with the Lakers is not entirely clear. The Lakers have not scheduled any meetings with them following last week’s exit interviews, though they have been leaning toward keeping him.

Dan D’Antoni led the Thundering Herd in scoring (17.5 points per game) during the 1968-69 season and then served as an assistant coach for the men’s varsity basketball team during the 1970-71 season. He was later inducted into the Marshall University Athletics Hall of Fame in 1990

Years later, Dan D’Antoni organized and raised funds for the Beach Ball Classic, a summer pro-am league that has featured cameos from Kobe Bryant, Antawn Jamison and Raymond Felton, among others. After coaching for 28 years at Socastee High in Myrtle Beach, S.C., Dan D’Antoni dropped everything to join his brother’s staff in Phoenix in 2004. He has stayed with Mike D’Antoni ever since in stints with New York and the Lakers. With the Lakers, Dan D’Antoni was his brother’s lead assistant and primarily oversaw the team’s offense.

Meanwhile, Mike D’Antoni played for the Thundering Herd from 1970 to 1973 before being selected in the second round of the 1973 NBA draft to play for the defunct Kansas City-Omaha Kings.

Mike D’Antoni also has three other assistants on staff, including Kurt Rambis, Mark Madsen and Johnny Davis. It’s not immediately clear how Mike D’Antoni plans to fill his brother’s vacancy.