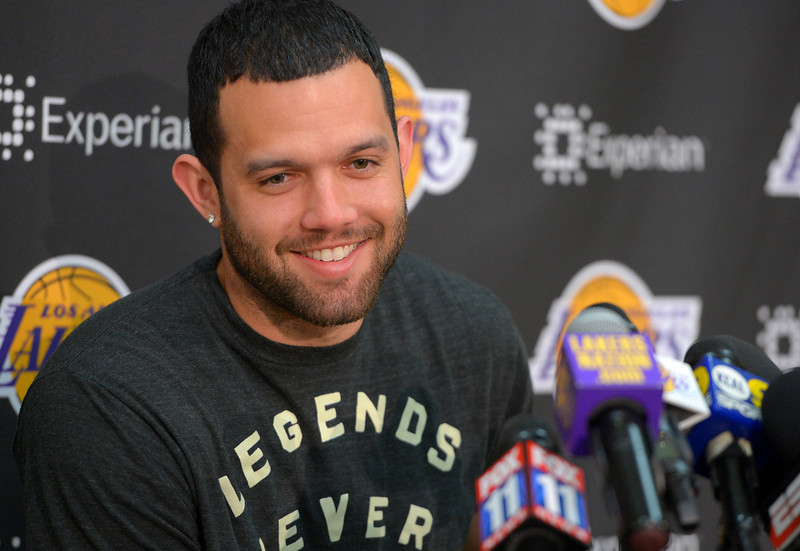 Jordan Farmar talks about the disappointing season and his future following his Lakers exit interview at their training facility in El Segundo, CA on Thursday, April 17, 2014. (Photo by Scott Varley, Daily Breeze)

At one point during his young basketball career, Jordan Farmar wanted to leave the Lakers.

One of the elements bringing Farmar back to the Lakers last year entailed Mike D’Antoni, whose fast-paced offense that puts a premium on outside shooting, floor spacing and playmaking tapped into Farmar’s creative mindset. But even with D’Antoni resigning on Wednesday over the Lakers’ failure to assure they will exercise his team option for the 2015-16 season, Farmar still stressed that will not negatively influence his free agency outlook on re-signing with the purple and gold.

“I want to be a Laker,” Farmar told this newspaper in a phone interview. “I like playing for Mike. Whether it’s Phil Jackson, Mike D’Antoni or whoever else coaches this team, that won’t deter me from wanting to be a Laker.”

Farmar’s affection for the Lakers also illustrates the different stage in his life surrounding his growth both as a player and person. Farmar’s want to stay with the Lakers extends toward playing for a franchise steeped in championship history and wanting to settle in his hometown with his family, including his wife (former UCLA and professional soccer player Jill Oakes) and two daughters.

The Lakers like Farmar, too, though his future could hinge on how the team fills out its roster and what other offers Farmar attracts both in the NBA and possibly overseas.

Farmar expressed plenty of sympathy for D’Antoni. He oversaw the Lakers finish with a 27-55 record, sixth-worst in the NBA, partly stemmed from the players missing a combined 319 games because of injuries, most notably to Kobe Bryant (torn left Achilles tendon) and SteveNash (nerve root irritation in back)

“It was unfortunate, Farmar said. “He wasn’t able to get a fair chance with all the injuries to the team that he had to go through.”