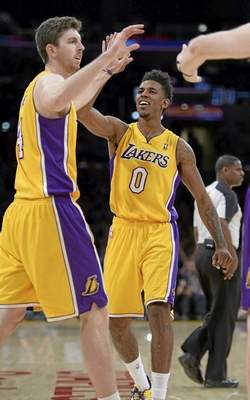 As he ascended from a low-level second round pick into a fixture onto the Lakers rotation, rookie forward Ryan Kelly attributed a key variable that explained such growth.

Oh, Kelly overcame a right foot injury that kept him out the entire 2013 offseason and parts of training camp. His basketball IQ made up for some of his physical shortcomings. Kelly’s work ethic expedited his learning curve. But he also credited Mike D’Antoni’s offensive system that puts a high value on so-called stretch forwards that can both shoot and space the floor tapping into that specific skillset.

Yet, despite D’Antoni’s resignation this week stemmed from the Lakers’ refusal to assure they would exercise his team option for the 2015-16 season, Kelly expressed confidence that he could still thrive in another system.

“I think I can play in multiple styles of offenses,” Kelly told this newspaper. “Obviously Coach D’Antoni is more spread out and that’s what I’m going to be, more of a stretch four. But I showed the ability to handle the ball and put the ball on the floor. Teams will always need somebody who can shoot. For guys my size, I can fit into any system.”

The Lakers will likely re-sign Kelly because of his shooting, basketball IQ and low price tag. He made $490,180 this season and would likely only need a slight raise to secure him as a restricted free agent. Kelly sounded mindful that both his leverage is limited, but he said there is “no question” he would still want to stay with the Lakers regardless of the team losing a coach that helped his growth.

“I was surprised just because he was under contract for next year,” Kelly said of D’Antoni’s resignation. “But I know this is a business. Everybody has to deal with the best interest of themselves. Obviously I enjoyed playing for Coach D’Antoni. He put me in a position where I could get an opportunity to play. There’s no question he’s one of the reasons I showed I can play in this league.”