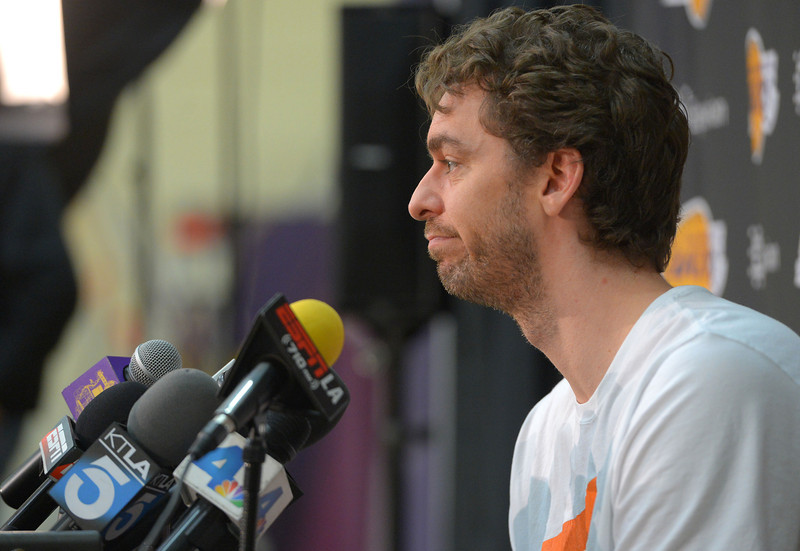 As much as he wanted to remain with the Lakers, Pau Gasol experienced frustrations that went beyond trade speculation and persistent losing.

Gasol also experienced philosophical differences with Mike D’Antoni, whose resignation last week ended a two-year run in which Gasol disliked his system that made him into more of a stretch forward instead of a post player. Yet, Gasol downplayed whether that automatically ensures he will re-sign with the Lakers once he becomes an unrestricted free agent on July 1.

“Mike leaving was not the be-all and end-all, but it is another factor,” Gasol told Marca.com, a publication in his native Spain. “What is certain is that we are without a coach and I say ‘we’ because I’m still thinking of myself as a Lakers player.”

That does not mean he will stay as one nearly two months from now.

That prospect once seemed unthinkable after Gasol guided the Lakers to two NBA championships and three Finals appearances after being acquired from Memphis in 2008. Despite the Lakers’ unsuccessful attempt to trade him in the Chris Paul deal and the ensuing reduced roles, Gasol still pledged his allegiance to the purple and gold. But with the Lakers finishing with an L.A. franchise worst 27-55 record last season, Gasol maintains his long-held affection for the franchise and city will not assure he will stay.

“I will give priority to a team that can win games and, let’s hope, challenge for the title,” Gasol said. “There appear to be several interested parties. I will listen to them all and I will select the best option for my interests.”

It appears very unlikely Gasol will make $19.3 million with any team as he did last season with the Lakers. But Gasol’s preference to join a championship caliber team suggests the Lakers will have a hard time convincing him to maintain the same loyalty he had amid fluctuating roles and trade discussions. In addition to last season’s mark, the Lakers have question marks surrounding the health of Kobe Bryant (fractured left knee) and Steve Nash (nerve root irritation in back). Yet, the Lakers have a chance to improve their team with a first-round draft pick and 12 of their 15 players becoming free agents.

Gasol also has a key teammate that could influence his sentiments.

“I spoke with Kobe before the end of the season and he told me he wanted me to stay,” Gasol said. “We have a great mutual respect and a great friendship.”