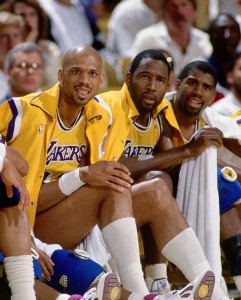 Lakers great Magic Johnson spoke to students at Long Beach State University Monday evening, giving life and business advice to the sold out crowd, which was closed off to the public. And two students were able to ask a very candid question: Is Magic interested in buying the Clippers?

“I don’t know what me and my group are going to do,” said Johnson in response. “But I will say this, 20 people have already called me interested in partnering up with me, so money will not be an option.”

When the initial question was asked, many cheered. But there were some boos (presumably from the many Lakers fans in the crowd). Johnson also admitted it would be a “battle for him personally” to pursue the Clippers’ purchase given his allegiance to the Lakers.

“I really truly love the Lakers,” said Johnson. “I am a Laker. So that will be interesting.”

Johnson, who has admitted he would love to own an NBA franchise, has been rumored to be eying the Clippers, hoping to be add to his Southern California empire that includes the Dodgers and the L.A. Sparks. Johnson also said during the talk that he would love to bring the NFL back to L.A.

His interest comes in the wake of Donald Sterling’s lifetime ban from the NBA for his racist comments, which mentioned Johnson.

“It’s a sad day. Racism. Discrimination. It’s why we still have to go through that, ‘Here we are in 2014,” said Johnson. “While I was upset, I feel sorry for him, living in the past. It’s just uncalled for.”

The Lakers’ great reminded the audience that the Clippers are not actually for sale as of yet, with the NBA owners still needing to vote Sterling out. Johnson figured that sale would not happen for another eight months to a year.

“There is no way that man walks away without a battle,” said Johnson.

The notion of buying the Clippers came up earlier in the event, when a audience member shouted it out during a pause in questions. The room, and Johnson, burst into laughter. But there were still some boos.

“Don’t do it,” someone shouted.