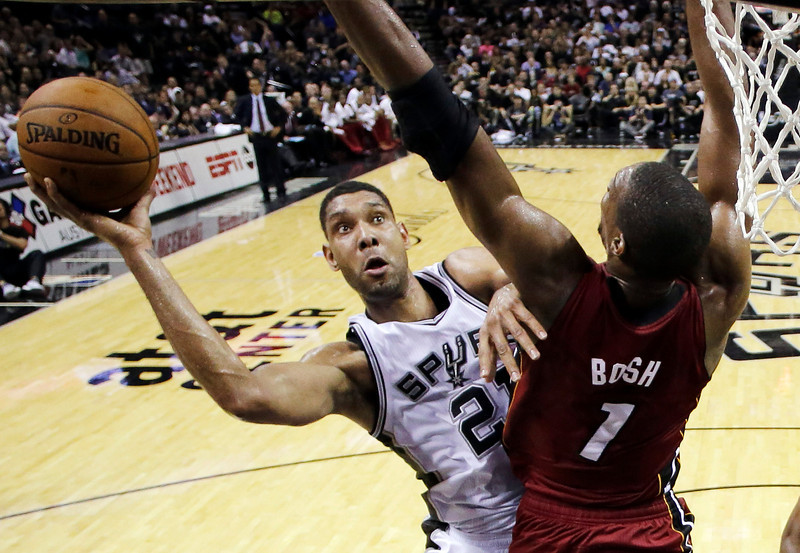 Anytime they stepped on the court and touched the ball, Kareem Abdul-Jabbar and Tim Duncan performed simple feats that still became miraculous and impossible to duplicate.

With a simple sky hook, Abdul-Jabbar became arguably the NBA’s best center, the league’s all-time leading scorer and winner of six NBA championships and six MVP awards. Mostly with the Lakers. With a simple game predicated on bank shots and footwork, Duncan became arguably the NBA’s best power forward, a continuously evolving and healthy post-player and facilitator and winner of four NBA championships and three MVP awards. All of them with the San Antonio Spurs with possibly more hardware to come.

“Tim Duncan,” Abdul-Jabbar said. “He’s very fundamental and every postseason his team is going a lot further than a lot of the other teams. They have a pretty good number of world championships. They keep riding Tim Duncan.”

Duncan has continuously adjusted his game as a post player, a facilitator and a mid-range jumper depending on the circumstances. He seamlessly fit in with David Robinson as a rookie to form the so-called “Twin Towers” lineup. Duncan willingly took a relative backseat to accommodate Tony Parker by becoming more of a passer. In each of his 17 NBA seasons, Duncan has ensured his fundamentals with his footwork, bank shot and athleticism stay sound.

“San Antonio should have the edge,” Abdul-Jabbar said. “They should be hungry. They should have won it last year. If Kawhi Leonard makes a free throw, they win it all. The have the same type of motivation the Lakers had in 85. We should’ve had it and we wanted it. The Celtics were still laughing but we had to wipe the smile off of their faces. I think San Antonio probably feels the same way.”

The Lakers responded by winning the 1985 NBA Finals against Boston in six games, a moment Abdul-Jabbar touts as his favorite accomplishment of his 20-year career. The Spurs took the first step in rectifying their 2013 NBA Finals loss with a Game 1 victory against Miami. Though that outcome partly stems from LeBron James sitting out the second half of the fourth quarter because of cramps in his left leg, the game also reflected San Antonio’s unyielding efficiency despite committing 23 turnovers.

The Spurs outrebounded the Heat, 39-29). They outproduced Miami in bench points (39-20). And after missing his first five shots, Danny Green’s 13 points coincided with James’ absence.

Of course, there was also Duncan, whose 21 points on 9-of-10 shooting and 10 rebounds reflected everything that has made both so great and Abdul-Jabbar’s favorite player.

“San Antonio is pleasing to me because they do it in the classic way,” Abdul-Jabbar said. “They do it inside out or outside in. They can beat you from the outside. They can beat you from the inside with Duncan. They play defense. They board. There’s no pat of the game that they don’t do well. That’s a real credit to Coach Popovich. He gets the right guys that enable his team to win.”