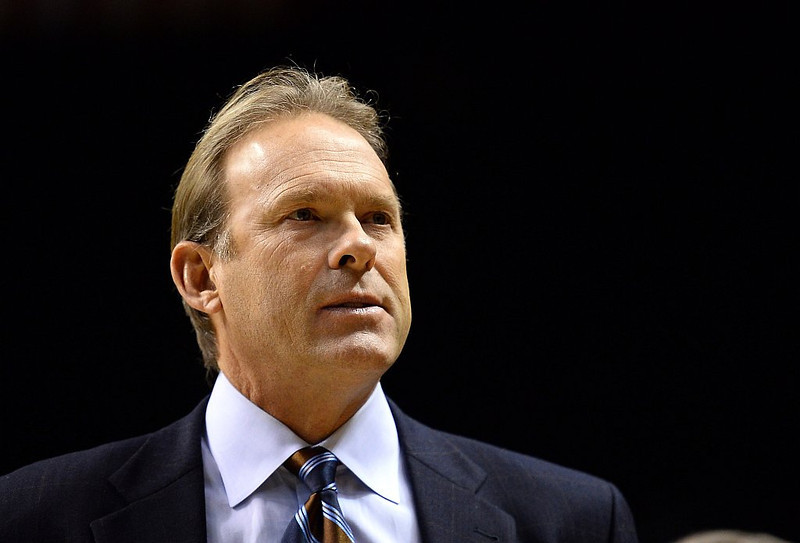 Has served in several capacities with the Lakers — player, assistant coach, head coach, assistant general manager. After taking over as coach for the fired Del Harris, Rambis’ Lakers finished with a 24-13 (.648) record but lost in the 1999 conference semifinals. Later became head coach of the Minnesota Timberwolves for two seasons, going 56-145 (.279) before getting fired in 2011. Is currently back with the Lakers as an assistant. Turned 56 in February. (Photo by Ethan Miller/Getty Images)

With Derek Fisher officially introduced as the New York Knicks’ head coach on Tuesday, the Lakers have granted the Knicks’ permission to interview Lakers assistant coach Kurt Rambis about joining his staff, according to a league source familiar with the situation.

Rambis would seem to be a natural fit to serve as one of Fisher’s assistants since they are both considered close to Knicks president and former Lakers coach Phil Jackson. Rambis’ coaching philosophies also mirror some of the triangle elements and post-up schemes that Jackson likes in his system. It is not clear when a formal discussion would take place. But Rambis is “willing to listen” about possibly joining Fisher’s staff, according to a league source familiar with his thinking.

But such an arrangement could hinge on the Lakers’ coaching search.

Rambis interviewed with the Lakers two weeks ago for the vacant head-coaching position left by Mike D’Antoni. Although Rambis represents a flurry of veteran coaches the Lakers interviewed, they have not narrowed down a candidate. They have decided only to zero in on coaches with past NBA head-coaching experience and do not have any interviews currently scheduled. But they plan to have follow-up interviews at some point.

Should the Lakers pass up Rambis in the coaching search, he would still be under contract with the team as an assistant. But the Lakers have maintained a policy, as do most NBA teams, that the head coach has autonomy to construct its coaching staff. The uncertainty surrounding the coaching hire coupled with Rambis’ relationship with Jackson and Fisher could make a Knicks’ assistant coaching gig more attractive.

Rambis has deep ties with the Lakers, including being a key reserve in the “Showtime Era,” coaching the Lakers in a lock-out shortened season (1999) and an assistant for seven seasons under Jackson and last season with Mike D’Antoni. Rambis also held several front office positions, while his wife, Linda has worked as the Lakers’ manager for special projects. Still, Rambis has shown a willingness to leave Los Angeles. He accepted the head-coaching job with the Minnesota Timberwolves in 2009 where he coached for two seasons.