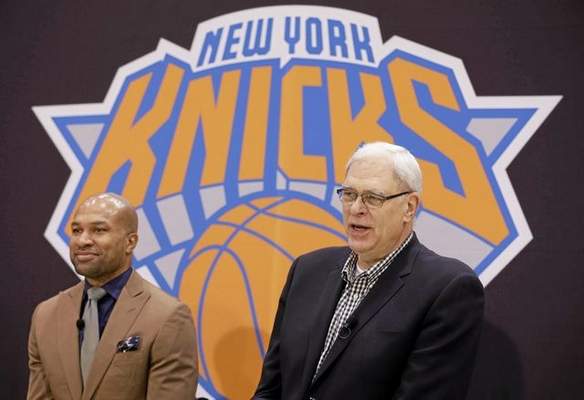 The question marks surrounding Derek Fisher’s first day as the New York Knicks’ head coach goes beyond whether his leadership qualities and relationship with president Phil Jackson can overcome the lack of previous head-coaching experience. Or whether Carmelo Anthony will leave through free agency. Or whether the floundering Knicks can become a championship contending franchise.

How will Fisher round out his coaching staff? A few possibilities have already emerged.

The Knicks already have received permission to talk with Lakers assistant coach Kurt Rambis. Although he said he has talked with Fisher and Jackson since the hire, former Lakers forward Luke Walton told this newspaper in an interview on Tuesday that he is “absolutely” interested in joining Fisher’s staff.

“I do think Derek Fisher is a great hire for that organization,” said Walton, who currently serves as a Time Warner Cable SportsNet Lakers Studio Analyst and a player development coach for the D-Fenders. “As far as being a leader and a hard worker and an absolute winner in everything he does, I think Derek Fisher is the perfect example of all those things. I think he’s going to do a great job.”

Walton represents one of the many who viewed Fisher in high esteem during his time with the Lakers. For Walton, his nine years with the Lakers (2003-12) coincided with Fisher finishing off his first stint before leaving in Golden State in 2004 and then returning in 2007. Both Fisher and Walton were traded in 2012 separate deals to Houston and Cleveland, moves that both eased up salary and paved the way for Ramon Sessions.

Walton’s possible stint as one of Fisher’s assistants makes senses for reasons beyond their relationship. Despite Walton’s persistent back injuries, he became one of Jackson’s favorites because of his strong familiarity with the triangle offense, easy-going personality and penchant for team play.