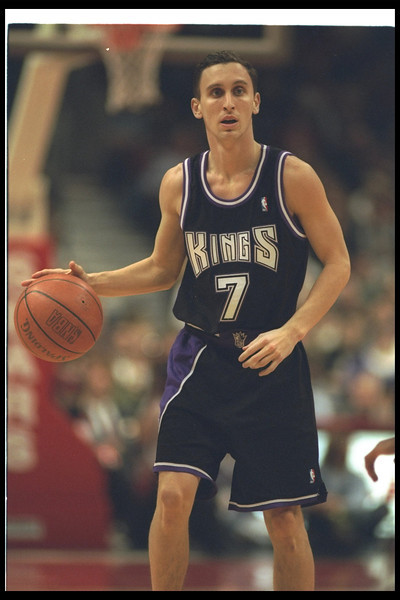 “13 Jan 1995: Guard Bobby Hurley of the Sacramento Kings moves the ball during a game against the Chicago Bulls at the United Center in Chicago, Illinois. The Kings won the game, 89-79. Mandatory Credit: Jonathan Daniel /Allsport”

Below is a recent interview with former Sacramento Kings guard Bobby Hurley, who was selected seventh overall in the 1993 NBA Draft. Hurley lasted only five seasons in part because of struggles recovering from a nearly life-threatening car accident he experienced his rookie season. Hurley, who is currently the head coach of the University of Buffalo’s men’s basketball team, provided tremendous insight for a story on former seventh overall picks, highlighting their successes and failures and how that ties into the uncertainty what impact the 2014 seventh pick can provide for the Lakers.
When you look at this year’s incoming draft class, what sort of impact do you think a seventh pick could make on the Lakers

Hurley: They can be difference makers in that spot. That will change form year to year. With my situation and having been the seventh pick and thinking I was going to make a big impact on my franchise and I was drafted, that didn’t really go as planned for me. There were some extenuating circumstances that went along with that. Here, there’s less likelihood that there is a ‘can’t miss’ pick. Obviously, you would be better if you were drafting in the top three. But I still feel you can get an All-Star caliber player at that position.”

Which players that would likely be available at that seventh slot do you think would best help the Lakers?

Hurley: I can’t really say anything about players’ injuries or things like that are happening. But things that I’m aware of in the press with a guy like Julius Randle, his body and his ability to rebound and ability to score in the lane and athleticism and as a high school player, I know he demonstrated an ability to play away from the basket too. He’s intriguing as a guy whose stock I would consider available at that spot. Aaron Gordon has a lot of upside too and is a high level defender. Then there’s some other players moving up the charts based on workouts. That was always an enjoyable process for me to get a chance to work out for a number of teams.”

Can you take me back to that moment in 1993? What do you remember about what your expectations were when the Kings drafted you seventh overall?

Hurley: I was coming off a great career at Duke and had a lot of success there. In the ACC, I played against a lot of NBA high caliber point guards. I felt pretty confident I could be a difference maker in that franchise. That’s what I was thinking about. I went after it hard in the workouts just to make sure I was getting drafted to a team that could utilize my abilities. That’s a part of this, too. It’s about the right fit with the coach, what the organization is looking for and then bringing in a player that fits that need. It was an exciting process and it was a dream come true for me to be drafted at that level.”

What do you remember about shooting the shoe commercial?


Hurley: I remember coming out to L.A. and doing it. I had a couple of family members involved in it. As a kid, you always watch all your idols playing and having a shoe deal and being on a commercial. That was a really cool thing. Now my players at Buffalo give me a hard time about it. They investigate me pretty hard. They dig and find all the dirt they can on me.

Hurley: I’m not always easy on them either (laughs).

Did you film that before or after you got drafted?


Hurley: It was different. There wasn’t the rookie wage scale. At that time, I hadn’t even signed with Sacramento officially. I was out in L.A. in August to do the shoe commercial. At that point, I hadn’t signed. But there were a number of endorsements like that I could take advantage of as a college player that I was able to capitalize on with becoming a drafted player.

It felt surreal and it felt like this shouldn’t be happening. How am I having a shoe commercial and having my cousin in it and being able to bring friends out here? I was supposed to go to a video music awards show that week. That’s exciting to do stuff like that. But as it turns out, my friends wound up going to the video music awards show and I stayed and continued to shoot the commercial. That one didn’t work out in my favor. It took really long, but a lot of that was the talent, too. I probably wasn’t what they quite needed to get it right every time and that they were looking for. A whole lot goes into it behind the scenes just to finish it. It was impressive to be a part of it.

I’m sure you’ve been asked this a lot, but it’s obviously part of your journey in the NBA. But can you take me through the car accident that you had and the subsequent challenges it entailed in recovering from that?

Hurley: I was feeling my way through and finding my way as a player. I was leading all rookies in assists at the time and trying to figure out a way how I fit in with Sacramento and figure out what my role was going to be,. It was obviously a tough thing to go through. There’s no preparation for it and really unfortunate. You can’t ever prepare to be in that moment and then have your life go in one direction. It came with a set of circumstances you’re not ready to deal with, but I made sure I got my body right as much as possible. After that, we dealt with the scars, mentally and physically. I put the work in to get back on the floor inside a year. That was pretty remarkable. My body healed up pretty well and I had great people working with me. Maybe looking back on it, I might’ve taken some more time and not been in such a rush to get back out on the floor and get the weight back that I had pre-accident. It became an issue for me to regain the type of muscle mass that I had and I wasn’t that muscular to begin with. Dealing with that was a life-altering night for me.

How challenging has it been to come to grips with the positive aspect that you survived this and still played afterwards toward the negative part that this altered the length and success of your career?

Hurley: You see all the time where it doesn’t work for people that are involved in accidents like that and how severe they can be. So I feel fortunate to be here. But I’ve carried baggage with me on that for a while. It’s hard for me to let it go just because I drove myself pretty hard as a player. I always had high expectations of what I did and accomplished. But I didn’t accomplish what I set out to do professionally. It affected me when I was in post-basketball life for a period of time. But the best thing that’s happened to me is the therapeutic part with coaching for the last four years and last three as an assistant coach for two different schools with Wagner and Rhode Island. To be back in a competitive role as a coach has replaced kind of what I was searching for with the post-basketball life.

How do you think your career would have turned out if that accident didn’t happen?


Hurley: It’s hard to judge it. It’s a super competitive league. There’s so many good and talented players that I can’t project. But I know I would’ve done better and I would have stayed longer in the league and had a more productive career. But I can’t say how much exactly it factored into everything. I knew I was lot better than I showed. I’m able to know that deep down. It did hand me some physical limitations that I didn’t have that prior to that happening.

Your situation is obviously unique. But knowing what kind of difference a seventh pick can make, what are the usual challenges they have to adjust to be able to succeed?


Hurley: In particular to that pick, those guys were the best player on their team and probably in their conference and maybe even in their region. Now it’s a whole new ball game. It’s about having a right attitude when you go to your new team. How are you going to be productive? Do you have the drive and hunger to know you are starting over now? You have a lot to prove at that level. Are you willing to put the time in and not be satisfied with what you accomplished to get there?

It’ll be a great situation for a rookie to have a teammate like Kobe Bryant and going to a franchise with the success the Lakers had where the expectations are to win. That seventh pick will be locked in and be ready to come and work. I imagine Kobe would demand that, and so would the organization. That is a great situation for a seventh pick to become part of a winning organization like that.

In my research, it seems like the history of seventh picks fall into three distinct categories: a handful that became stars, a good chunk that stayed in the league for a while as a decent role player and then another chunk that didn’t last more than a few seasons. Specifically with a seventh pick, what particular challenges are there in being able to anticipate what kind of player you will get?

Hurley: I don’t know the specific dynamics of that. You have to dig pretty deep. You have to have a large pool of guys larger than you would earlier in the draft. You don’t know how it will shake out in time one through six with who will get taken. You really have to do your homework and make sure you’re locked in and feel great about a couple of prospects you feel will be there for you at seven. I was fortunate to have a year in Philadelphia working under Billy King and being around during the draft process. We were picking at number eight. Things worked out in our favor where the guy we really wanted was Andre Iguodala and he slipped to us there. It was exciting for us because we had projected him as possibly being a top five pick, We didn’t think he’d be there. Sometimes you need good fortune with those picks to get the guy you’re locked in on.”

Photos: Will it be Lucky No. 7 for the Lakers in the NBA Draft?