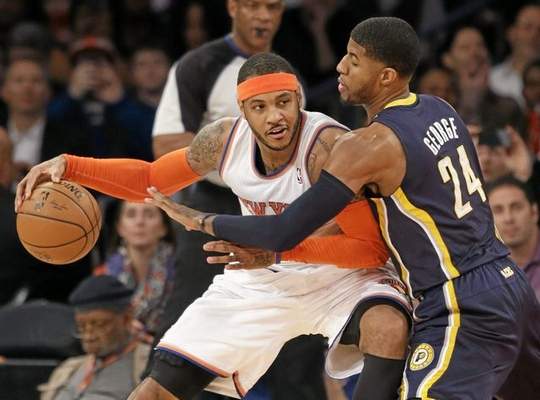 Carmelo Anthony, left, formerly of the New York Knicks and being guarded by Indiana’s Paul George, reportedly will meet with Lakers officials this week. (Seth Wenig / The Associated Press)

The Lakers made sure they left nothing unsaid when they hosted Carmelo Anthony last week for a meeting. The NBA championship trophies in Jeanie Buss’ office provided a nice backdrop. Kobe Bryant’s continuous conversations with Anthony may have reinforced their friendship and assuaged concerns about Bryant’s health and how they would play together.

“I told Carmelo, I said, I wish your wife were here because she’s more popular than you in Los Angeles. We’re trying to recruit her, because if you can get LaLa, Carmelo has no say,” Worthy recently told SLAM. “So, we’re trying to get her to Hollywood. Hollywood is right here. She can do whatever she wants”

That partly explains why Lakers team president Jeanie Buss, senior vice president of business operations Tim Harris and executives with AEG and Time Warner Cable SportsNet attended the meeting. The Lakers remained well aware that Anthony remains intrigued with his off-court business ventures and spends his offseasons in Los Angeles where he already owns a home.

But the Lakers are hardly overshadowing their on-court brand. They also promoted their plan to rebuild by maintaining cap flexibility for future offseasons and remaining willing to spend money for elite players. Case in point, the Lakers pointed to Bryant’s two-year, $48.5 million extension that they take care of superstars.

“We tried to convey to him, the city of Los Angeles, what it brings to elite athletes, and what we could do to support him,” Worthy said. “Carmelo has an open mind. He knows this is a critical decision at this point in his career. He’s 30 years old, so he can’t be shopping around if he wants to win. I think it’ll be New York or L.A. and I think L.A. still has a shot.”

Kobe Bryant ‘would love to play’ with Carmelo Anthony

Kobe ‘wasn’t even there’ for pick-up game at UCLA