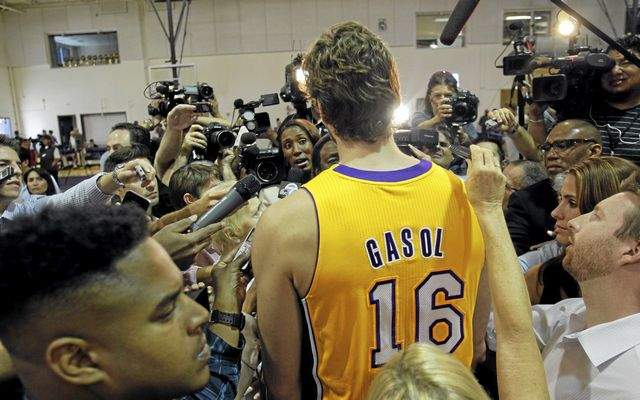 Los Angeles Lakers forward Pau Gasol, center, of Spain, has been with the team through both good times and bad. Monday night, he enters free agency and the team has said it has big-name players it wants to pursue before courting Gasol. (Alex Gallardo/The Associated Press)

For the past three years, the Lakers have wanted Pau Gasol not to just trade him away in a lopsided deal or cost-cutting move. During that same time, the Lakers still became willing to entertain offers for him.

It appears that has not changed. The Lakers still want to re-sign Pau Gasol, regardless of whether the increasingly unlikely scenario Carmelo Anthony comes here plays out. But the Lakers are also open toward executing a sign-and-trade with Gasol to another team should he want to leave, according to a league source familiar with the team’s thinking.

Gasol has not informed the Lakers of his plan. But the Lakers are mindful that Gasol has stated he wants to play for a championship caliber team and has entertained a vast amount of interest from Miami, San Antonio, Oklahoma City, Chicago and New York. It is not currently clear which scenarios the Lakers would entertain a sign-and-trade with Gasol, who made $19.3 million last season. But in general terms, the Lakers want to ensure they receive a quality player in return, if not more, and that their contract does not compromise their financial flexibility both in length and size of the contract.

To secure Anthony to a maximum salary, the Lakers would likely have to renounce Ryan Kelly, Kent Bazemore and Kendall Marshall. They may also have to waive Steve Nash, whose $9.7 million salary could stretch out through three seasons through the stretch provision. Meanwhile, Gasol have to take a significant pay cut.