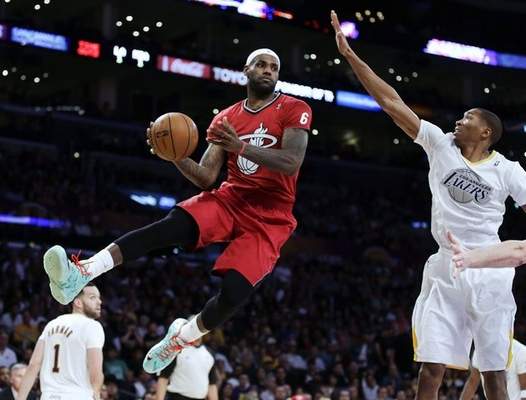 In this file photo, Miami Heat forward LeBron James, left, passes around Los Angeles Lakers guard Wesley Johnson in Los Angeles, Wednesday, Dec. 25, 2013. James and Carmelo Anthony, both free agents, had not yet decided which team or teams to sign with as of Thursday evening, leaving the Lakers in a holding pattern. (AP Photo/Chris Carlson)

LeBron James announced through an article written in Sports Illustrated that he will return to the Cleveladn Cavaliers after famously leaving them four years ago and announcing in a one-hour television special that he is “taking his talents to South Beach.” But after guiding the Miami Heat to four consecutive NBA Finals and two NBA championships, James will return to his hometown and try to fill a similar job description.

“When I left Cleveland, I was on a mission,” James wrote. “I was seeking championships, and we won two. But Miami already knew that feeling. Our city hasn’t had that feeling in a long, long, long time. My goal is still to win as many titles as possible, no question. But what’s most important for me is bringing one trophy back to Northeast Ohio. I always believed that I’d return to Cleveland and finish my career there.”

The Lakers showed enough determination to acquire James that general manager Mitch Kupchak and senior vice president of Business Operations Tim Harris flew to Cleveland last week to meet with James’ agent, Rich Paul. But the Lakers never met with James personally. The Lakers also hosted a 2 1/2-hour meeting last week for New York Knicks forward Carmelo Anthony, whom accounts described as receptive toward the sales pitch. That entailed the Lakers talking about their 16 NBA titles, cap space, Kobe Bryant’s improved health and numerous business ventures for Anthony and his wife, La La, a reality television star. But a league source familiar with Anthony’s thinking reiterated on Thursday he has not decided where he will play next season. There is a prevailing sense, however, that Anthony would make a decision after James.