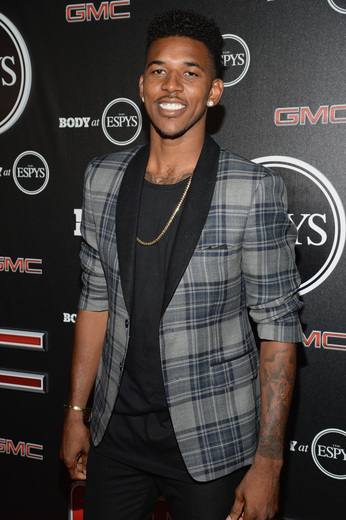 A sense of joy and relief filled Nick Young’s emotions as he processed the Lakers securing him to a four-year, $21.5 million deal. The joy entailed basking in relative riches after his gamble to opt out of his $1.2 million player option paid off in securing a longer and more lucrative contract with the Lakers. The relief reflected Young’s uncertainty on whether the Lakers would keep him amid their hope to maintain financial flexibility and their continuous pursuit of Carmelo Anthony.

“I thought, ‘Maybe I might end up being somewhere else,” Young told this newspaper Tuesday night at Lure Nightclub, which hosted an ESPN-sponsored red carpet event commemorating its recent Body issue. “I knew if Melo signed here, I would pretty much have to go somewhere else.”

“He was the first person to call me. He was telling me to get in the gym and work hard,” Young recalled. “They’re already counting us out.”

The Lakers are not just coming off a 27-55 record last season, the team’s worst in L.A. franchise history. The Lakers lost in the LeBron James and Anthony sweepstakes. Pau Gasol, who guided the Lakers to two NBA titles in his 6 1/2 seasons here, left for the Chicago Bulls. The Lakers also lost key reserves in Jodie Meeks to Detroit and Young’s close friend, Jordan Farmar, to the Clippers.

“This is a chance for him to see what it’s like to be on the other side and be an enemy,” Young said of Farmar leaving. “We’ve always been rivals since high school. But I wanted to keep him.”

Yet, Young stayed optimistic. He gushed about Bryant’s recovery after playing in only six games last season because of injuries to his left Achilles tendon and left knee. Young touted the Lakers acquiring guard Jeremy Lin (and a 2015 first and second round pick) from the Houston Rockets for the rights to overseas player Sergei Lishchuk. Young liked the Lakers agreed to a two-year, $18 million to bring back forward Jordan Hill. And, of course, Young mentioned how the Lakers signed on board for another four years of “Swaggy P.”

It seems pretty challenging for the Lakers to live up to Young’s bold prediction . Plenty of that depends on Bryant’s health and play, for sure. Some of it hinges on how much Young duplicates last season’s performance in which he averaged a team-leading 17.9 points on 43.5 percent shooting. When Young went through that process, Bryant offered him some tough love on how to develop into a complete player.

Young believes he will remain a backup small forward. But how will he adjust toward playing with Bryant and stomach his infamous death stares?

“Oh man,” Young said, smiling. “I can handle them though. A lot of them can’t handle Kobe’s looks.”

Young received plenty of them last year, the most famous one involving Bryant directly looking at Young with a stern expression from the sidelines.

“That moment, we were down by like 20 at Golden State,” Young recalled. “It was bad. He gave me that look, ‘Like come on!’ I tried, but it was tough.”

Safe to say those interactions will continue, with Bryant’s early offseason phone call setting the tone.

“Kobe puts more pressure on me,” said Young, who has frequently played in Drew League games this summer. “Ever since he gave me that phone call, I’ve been in the gym every day.”