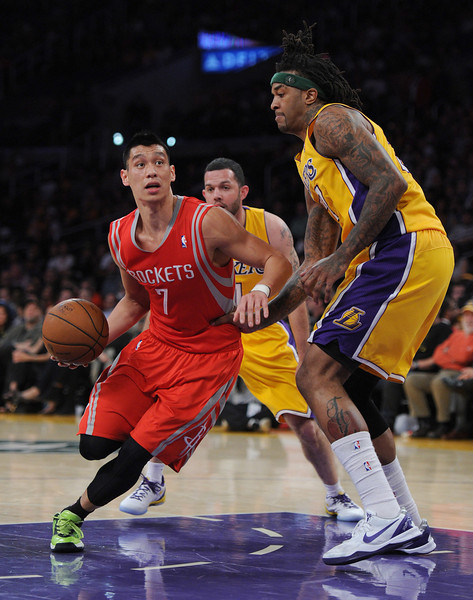 What once consumed Jeremy Lin no longer seems to bother him. After having his starting position stripped away last season with the Houston Rockets, Jeremy Lin downplayed whether he would like to start with the Lakers at point guard or play behind Steve Nash.

“That’s a question that’s up for the coach,” said Lin Thursday at his introductory press conference with the Lakers, mindful the team still has not hired one. ” I know right now that’s obviously a question that can’t be answered. If you ask any player,they’ll believe they are capable of starting. If there’s anything I learned from this past year, it’s really not that much about who starts. It’s about who finishes and the time you play you’re given. I think that’s probably one of the biggest things i learned last year. I obviously believe I can start for an NBA team and help that team win. As a competitor, I would obviously love to. But that’s not me coming in saying I need this or need that. I want to be a part of the team.”

Instead, Lin gushed more about learning preparation tips from Kobe Bryant and playing behind Nash. Lin and Nash have become close enough to appear together in a Youtube video and compete last season in Nash’s charity soccer event. The New York Knicks were also in talks to acquire Nash in 2012 when Lin was only a season removed from the so-called “Linsanity.” Lin also has admired the 40-year-old Nash has “made the most with what they’ve had” and gushed about footwork, playing off of angles, passes and how he plays the pick-and-roll.

But Lin downplayed how he will approach his position given he will likely need to provide reinforcements for Nash, who played in only 15 games last season because of constant nerve root irritation in his back.

“It should just be on attack mode all the time because that’s who I am as a player,” said Lin, who has averaged 10.8 points on 40 percent shooting in four seasons. “Regardless of his health or anybody else’s health, I’m going to be on the attack.”

Lin also floated the idea he could play alongside Nash as an off-ball shooting guard along with Nash, a strategy he believed worked well with Houston point guard Patrick Beverly. Lin has also devoted his offseason training efforts toward sharpening his floater and playing aggressively at a more controlled pace.

“I’m much more of a complete player,” Lin said. “I’ve learned to do a lot of things that maybe I never had to do before, which was learning how to play off the ball, cutting and challenging myself with some of the weaknesses that I had to improve on.”