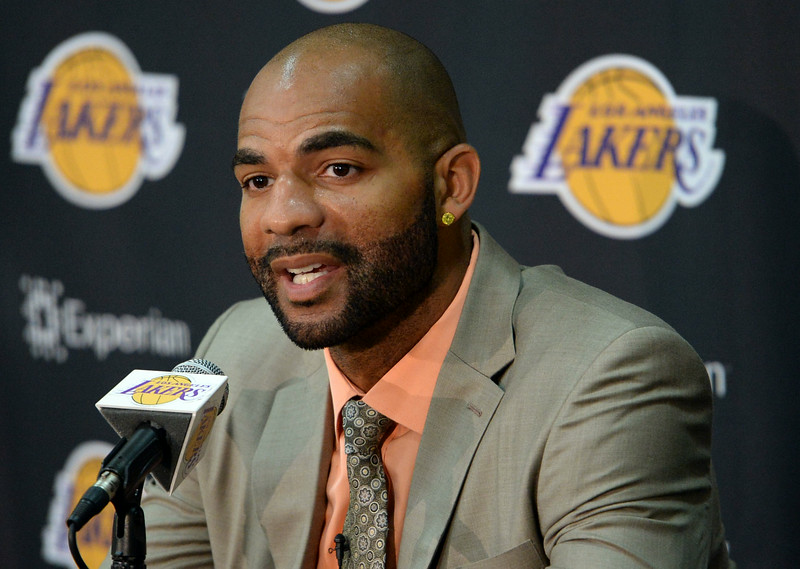 “The Los Angeles Lakers held a press conference to announce the addition of Carlos Boozer to the team Friday, July 25, 2014, El Segundo, CA.

Below is the fourth in a series previewing the story lines surrounding each player on the Lakers’ roster for the 2014-15 season. This post focuses on Lakers forward Carlos Boozer.

1. Boozer will likely enter this season with something to prove. It wasn’t too long ago that Boozer played on the 2008 U.S. Olympic team, made two All-Star appearances and became a regular fixture among the Lakers’ playoff opponents. The Lakers are excited for picking up such a player off waivers for only $3.25 million. But the Chicago Bulls parted ways with Boozer via the amnesty provision to accommodate Pau Gasol’s arrival and a season after Boozer mostly sat out of the second and fourth quarters because of Taj Gibson’s emergence.

That should give Boozer plenty of fuel when he plays for the Lakers, who are already motivated enough after fielding skepticism about their rebuilding after finishing last season with the worst record in L.A. franchise history. Boozer will have to address some question marks noted below, but he has a resume that suggests he could bounce back from a season in which he averaged 13.7 points and 8.3 rebounds, his lowest mark of his 12-year NBA career since his rookie season with the Cleveland Cavaliers (2002-03).

Boozer still finished second in scoring and in rebounding through his four seasons with Chicago, and should instantly provide the Lakers with that void stemmed from Gasol’s departure. Boozer, whom Lakers coach Byron Scott tentatively has penciled in as a starting power forward, could buy the Lakers time in case rookie Julius Randle experiences any hiccups adapting to the NBA. And Boozer can fill this job description with plenty of motivation, with each basket, rebound and hustle play as a retort to those who cast him as damaged goods.

2. How much will Boozer improve on defense? Plenty of Boozer’s struggles, particularly with Chicago last season, stemmed from his defensive weakness. So much that Bulls coach Tom Thibodeau routinely sat Boozer at the end of the game. Various media outlets in Chicago provided on-court observations about Boozer’s defensive problems, which ranged from slow reactions on rotations and a lack of hustle. Boozer often yelled in dramatic fashion as if to camouflage his lack of defensive intensity.

As much of an issue this became for Chicago, the Bulls possessed an overall gritty defensive identity led by Joakin Noah and Gibson. As for the Lakers? They have no elite defensive players. So this puts even more pressure on Boozer to improve defensively namely because they do not have many other options. Sure, the Lakers can tap into Jordan Hill’s energy. Perhaps Ed Davis and Randle will log time if they show defensive promise. The Lakers could become sound on team defense to offset their lack of individual defensive talent. But that will not be enough if Boozer does not somehow improve on defense.

3. How will Boozer handle a possible fluctuating role?
It seems possible Boozer could encounter more frustration than even he experienced in his last season in Chicago. One, the Lakers may not make the playoffs, especially if they become saddled with injuries again. Two, Boozer may eventually lose his starting spot based off of two scenarios. Randle quickly emerges. The Lakers fall out of playoff contention, leaving them with more incentive to develop their young players for the long term. Or perhaps both?

How would Boozer react to such circumstances? Media accounts from Chicago paint Boozer as someone who was still regarded as a good teammate even when he was on the bench. But at one point last season, Boozer also publicly questioned Thibodeau’s strategy in sitting him out late in games. This situation could become more frustrating given Boozer’s contract expires after this season, making this year an open audition for the Lakers or any other NBA team to prove he still has quality basketball left in him at 32 years old.

4. How much will Boozer help Randle develop?
Regardless of how Boozer’s season with the Lakers turns out, he could play a big part in helping Randle’s game. Should Boozer thrive well as a starter, his veteran experience and talent could spur Randle to work even harder and smarter to ensure he earns at least some playing time. If Randle struggles and loses his minutes, he could still make the best of circumstances by embracing Randle’s presence. That could range anywhere from encouraging him on the sidelines, competing hard in practice and sharing any veteran tips.

How this dynamic plays out will largely determine the strength of the Lakers’ frontcourt. Boozer needs to stay competitive to maximize his role while also resisting the temptation on padding his own numbers and having any antagonistic relationship with Randle. It is presumptuous to anticipate how this will turn out. But it will become an important issue both during the beginning of the season and if any lineup shuffling occurs.

5. Boozer will not have to worry leading up to the trade deadline. The NBA’s current labor deal prohibits players picked up through an amnesty claim, such as Boozer, to be traded at any point during this season. So that leaves Boozer with plenty of security knowing he will stay here. But it leaves the Lakers with an interesting conundrum. Leading into the trade deadline, the Lakers will have to weigh the benefits between playing Boozer assuming he is effective or playing other frontcourt players to maximize their trade value.