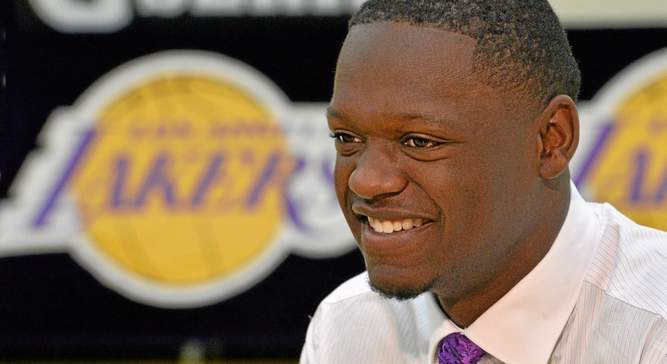 Below is the seventh in a series previewing the story lines surrounding each player on the Lakers’ roster for the 2014-15 season. This post focuses on Lakers forward Julius Randle.

1. Will Julius Randle climb up the Lakers’ pecking order?
The Lakers may have taken a significant step with their rebuilding process by drafting Randle. But it does not appear the Lakers are giving him the keys to the Ferrari just yet. Lakers coach Byron Scott said three weeks ago that he is leaning toward starting Carlos Boozer at power forward over Randle because of Boozer’s experience as a 12-year NBA veteran.

Scott’s current preference could help him garner support among his most experienced players. But Scott’s pecking order might also provide a carrot for the younger ones, including Randle, to work harder to prove their coach wrong. Randle demonstrated his thirst for self-improvement, both in his lone season at University of Kentucky and at his introductory press conference with the Lakers. But how much and how quickly will that carry over into the NBA?

2. Will Randle’s physical presence translate into the NBA?
The Lakers seemed pleasantly surprised that Randle stayed available once they could make their seventh overall pick, even if public reports emerged citing concern about various NBA front offices about whether Randle’s injury to his right foot two years ago would require surgery. That’s in part because Randle’s dominating 6-foot-9, 250 pound frame has elicited comparisons to Memphis forward Zach Randolph, who has thrived in the post partly through his physically bruising style.

Such a skillset should help Randle’s learning curve as he tries to improve the rest of his game. This could also help Randle provides easy baskets inside and rim protection, two traits the Lakers consistently lacked last season. Yet, even Randle’s talent could become an adjustment in itself. The NBA features far more physically developed players than college basketball should offer. And while Randle’s strong figure will become necessary in fitting into the pro ranks, it may not be enough in allowing him to dominant as strongly as he once did at University of Kentucky.

3. Can Randle develop a mid-range game? This has become the main area of focus both in Randle’s offseason routine and with the Lakers’ determining how well he will adjust. Randle rarely showed much of this with the Wildcats, citing that the team’s deep roster rightfully put him in a position mainly to become a bruising power forward. But in his individual workout with the Lakers, Randle canned jumpers with remarkable consistency. Randle’s Summer League performances looked promising, averaging 12 points on 44.8 percent shooting, four rebounds and two assists. Yet, those are two mere snapshots of an otherwise incomplete picture.

4. Randle should benefit from Kobe Bryant’s mentorship. The best way for Randle to show off his fanhood for Bryant will no longer entail wearing his jersey and shoes, buying his memorabilia or watching his games. It will entail Randle soaking up everything Bryant does, ranging from studying his preparation, listening to his feedback and playing with each other. Safe to say that Randle will both relish and thrive under playing with Bryant. Beyond idolizing Bryant growing up, it appears Randle has surrounded himself with friends and mentors that have provided him tough love in the same way Bryant has famously done both good and bad for teammates.

5. Will Randle have the chance to develop? One of the potential negatives involving the Lakers’ acquiring Boozer involves the possibility that he could stunt Randle’s growth. Yes, the Lakers’ price for Boozer off the amnesty wires seemed relatively inexpensive ($3.2 million). Yes, Boozer has compiled enough of a track record in his 12-year career to suggest he could overcome last year’s poor showing in Chicago. Yes, it never hurts too much for any team to acquire big men in case injuries arise. Yes, Randle will also have to earn playing time.

Yet, Scott acknowledged that a challenge will emerge in taking advantage of the Lakers’ depth without compromising Randle’s long-term growth, a variable that will significantly determine how quickly the Lakers can rebuild. The Lakers currently have the mindset to compete next season, so much as Scott saying the unlikely that they are playing for an NBA title. But such priorities could change for reasons beyond either Boozer struggling and/or Randle playing well. Should the Lakers find themselves out of the playoff picture, it would be more advantageous for Randle to play more even if it comes at the expense of a few wins and a possibly upset veteran in Boozer.