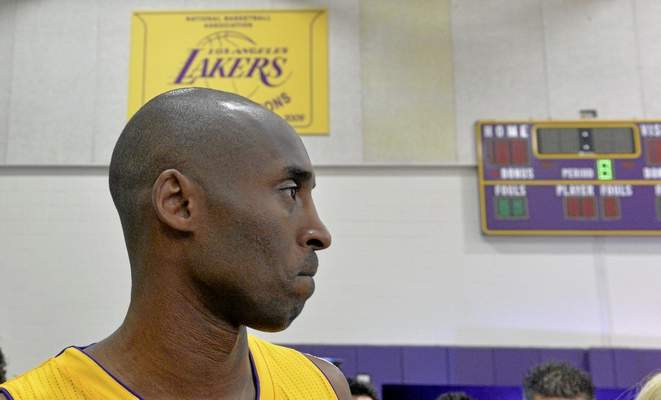 Kobe Bryant’s motor started to accelerate, and it went beyond impressing the Lakers brass with yet another promising performance during a series of five-on-five scrimmages during Thursday’s practice.

For every time Bryant elevated himself to sink another pull-up or fadeaway jumper, his volume level increased too. Moments after drawing a foul on Nick Young, Bryant chirped, “Don’t play with me Nick. You ain’t strong enough.” Later on, Bryant sank a fade-away jumper over second-round draft pick Jordan Clarkson, a sequence that nearly made him fall to the ground. Chided Bryant: “Don’t hurt yourself young fella.”

Yes, it sure seems like Bryant has slowly but surely morphed back to his normal self. Lakers coach Byron Scott praised Bryant for looking “more active” in a series of scrimmages on Thursday than in Wednesday’s morning session. Bryant remained sharp and fluid in maintaining consistency with his jumper and defense without trying to over extend himself. Bryant conceded he has “general soreness,” but Scott has preserved him by sitting him out of Wednesday’s evening session and the sprinting drills on Thursday.

Amid all that progress, Bryant also appears in mid-season form with his trash talking.

“We’re competing. We really try to push each other, especially when we get tired,” Bryant said. “When guys are talking trash back and forth, you can’t help but play at your best.”

It appeared Bryant reserved his sharp tongue mostly for Young, who went up against him one-on-one in several sequences. After Bryant drew a foul, Young pleaded to the official, “don’t feed into that and reward him just because he’s Kobe Bryant.” When Young continued talking trash during one of Bryant’s foul shots, the Lakers’ star said, “not to me you don’t.”

“He playfully does it. But then I take it to another level,” Bryant said of Young. “I do it because like I said, when you’re tired, it’s very easy to go through the motions. But when somebody is talking to you, you have no choice but to perform.”

“They do go back and forth. Even when they’re not guarding each other, they’re still talking,” Scott said of Bryant and Young. “It’s fun to watch because you know it’s all in good spirit. But they’re also trying to beat each other too. That makes the competition that much better.”

Only days earlier, Bryant told Time Warner Cable SportsNet that he ranked Young’s girlfriend, rapper Iggy Azalea, ahead of Young because “she has accomplished more in her career.”

“He always seems to be motivating me,” Young said of Bryant. “Even when he said that comment about Iggy, he told me ‘after you work with me, you’ll be back on top.'”

But that hardly overshadowed Bryant’s vicious tongue, something he believes will help set the tone throughout the rest of the season.

“It’s always fear of embarrassment. When people are watching and they have cameras on, the last thing you want to do is seem like a wuss,” Bryant said. “I’m sure that’s how it is with everybody.”


Lakers’ Byron Scott stressing defense, but will it pay off?