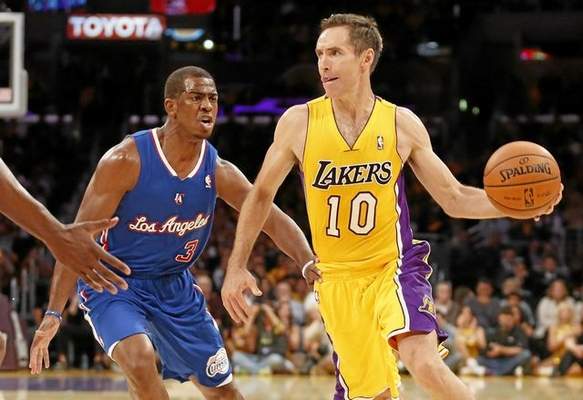 Plenty can happen for Steve Nash between now and when the final year of his $9.8 million contract expires with the Lakers.

His unyielding fight in battling Father Time could end in another knockout punch. Or Nash could somehow defy the odds and stay healthy. If that happens, Nash seems capable of providing glimpses of when he collected two NBA MVP awards. Or he may just serve as a mentor for Jeremy Lin and others. Lastly, will the Lakers significantly bounce back from their worst season in L.A. franchise history or does last season’s nightmare just serve as a preview to a bad sequel?

After suggesting this past offseason that Nash would retire once his contract expires, he said it’s possible in a recent interview with this newspaper that he may want to play more. That hinges on a few variables.

“My health, enjoyment and effectiveness,” said Nash, who’s entering his 19th season as the NBA’s oldest player at age 40. “If I have a chance to play, it would have to be here. I’m not going to at this stage move somewhere else for a season and move my kids there.”

It’s way too early to gauge the Lakers’ interest level in keeping Nash considering all of the uncertain variables surrounding him and the team. But keep in mind that the Lakers made plenty of moves this offseason in case Nash’s health failed him. They acquired Jeremy Lin from Houston in a trade. The Lakers paid the Washington Wizards $1.4 million for their 46th draft pick, which went to Missouri guard Jordan Clarkson. The Lakers also added veteran guard Ronnie Price.

“Some of that was done thinking about the ‘What if?’ Lakers general manager Mitch Kupchak said before training camp started. “What if one of our veterans doesn’t make it through training camp or the season? We’ve kept that in mind and prepared for the possibility and we have the roster spots in case we decided to keep somebody.”

Nash remains equally uncertain about how he will handle his post-retirement life.

“That’s going to be a transition period,” Nash said. “Really, I’m in no rush. I’m going to take my time and make sure I figure it is what I want to spend my time doing and not rush it. It needs time. Maybe it will take me a year, two years or five years. I feel like the longer I take the better.”

Still, Nash offered a few clues on what that life will entail.

He maintains he will live in Los Angeles “forever”, gushing about the climate and the culture. Nash will stay as the general manager of the Canadian national team. He added he will likely remained involved with his production company, Meathawk. It’s also worthy to note that Nash has stayed active with his self-named foundation that helps underserved children.

Nash will focus on present moment, hopeful that his health and play will prove effective enough both to help the Lakers this season and further convince himself to stay in the game.

“Inevitably it’s a difficult thing to retire from professional sports,” Nash said. “I’ve gotten to a place where I’m much more comfortable with that and open to the end, whatever it is. I think it’s positive and it will help me enjoy my life instead of being miserable. But some of those games where I played well and it didn’t disappear on me, I realized it’s still there. With a little bit of luck and some good health, I can still do some things out there.”

Steve Nash believes he will practice on Sunday