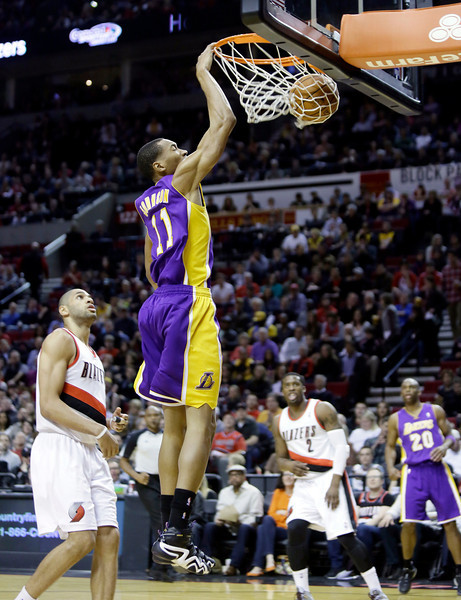 The Lakers would marvel at his athleticism. They would fret at his inconsistent play. They would scratch their heads how Johnson could defend the Clippers’ Blake Griffin one night and not stop an unknown player the next. Johnson would relish his opportunities. He would downplay his up-and-down
performances. Johnson would occasionally point out the multiple responsibilities that often entail defending someone far much bigger than his listed 6-7, 210-pound frame.

Now, Johnson enters the 2014-15 season both with a fresh slate and a role in which he believes he will thrive. Lakers coach Byron Scott has strongly suggested Johnson will start at small forward, beginning with the team’s preseason opener Monday night against the Denver Nuggets at Valley View Casino Center in San Diego. Johnson’s services will become more valuable considering the Lakers are thin at small forward because of injuries to Nick Young (torn ligament in right thumb), Ryan Kelly (strained left hamstring) and Xavier Henry (back spasms).

“I expect a lot from Wesley Johnson,” Lakers coach Byron Scott said. “He’s been looking great in training camp, running up and down the floor, defending. That’s something I think he can be one of the best in the league at doing.”

Johnson maintains he will be ready.

“I know what to expect. I know what I’m coming into,” Johnson said. “I know I’m going to play the wing now. That’s what I’m going to do on the offensive and defensive end. I’m ready for it.”

Johnson has a simple and honest reason why he didn’t feel ready last season, his career-high 9.1 points overshadowed with inconsistent shooting (36.9 percent from three-point range) and inconsistent defense.

“I don’t feel like I got a fair shot,” Johnson said. “There were all those injuries. It’s tough for everybody. You can’t get into a rhythm. You’re getting spot minutes here, and then other times you’re getting big minutes. Then sometimes you don’t play. You were everywhere. It was tough.”

“I figured out what I can and cannot do on defense and how to front guys and how to fight around on defense,” Johnson said. “If I do switch out on guys, I learned how not to be on an island or how to defend them. That’s one of those things I can put in my back pocket. Even though it was different for me, I took it with a grain of salt and learned from it.”

Sometimes it worked. Johnson held Griffin scoreless in the fourth quarter of the Lakers’ season-opening win against the Clippers. Johnson also provided the game-winning basket off an inbounds lob pass in a regular-season upset against Portland in April, a game in which the Trail Blazers’ LaMarcus Aldridge needed 19 shots to score 21 points.

“Last year was kind of a freak situation with how they were playing Wes,” said Lakers guard Kobe Bryant, who soon disliked D’Antoni’s “small-ball” system. “Wes, his greatest strength is defensively. In this culture where defense is priority number one, I think he’ll flourish.”

Bryant partly gained that impression after working out with him this offseason, which often entailed Johnson visiting him at his Newport Beach residence at 7:30 a.m. Those workouts consisted of what Johnson called “a lot of repetition over and over again” on various offensive, defensive and footwork drills. Since then, Bryant reported Johnson looking “phenomenal” and “incredible,” gushing about his conditioning and defensive effort.

“That’s the main thing people want to see with me, that consistent factor,” Johnson said. “I think you’re going to see a lot of that.”

No one saw that last season, and the reasons appeared to go beyond Johnson feeling uncomfortable with his multiple roles.

Consider Johnson’s marksmanship from three-point range in November (45.7 percent), December (27.5 percent), January (34 percent), February (50 percent), March (22.2 percent) and April (41.9 percent) under pretty similar playing time. Consider the Lakers often believed he lacked court awareness regardless of who he defended. Consider that Johnson’s effort and confidence level often depended on both his offensive production and any mistakes he made. Consider that the 27-year-old Johnson has had nondescript stops with the Minnesota Timberwolves (2010-12) and Phoenix Suns (2012-13) after being selected fourth overall in the 2010 NBA Draft out of Syracuse.

Yet, the Lakers gave Johnson a second chance this offseason by signing him to another one-year deal around $1 million.

“The first thing is just being comfortable out there and knowing this is where he will be at all times,” Scott said. “I got to get him to understand I have a lot of faith in him and a lot of confidence in him. When he’s playing, don’t worry about mistakes. Just play. If you make a mistake, just make sure you don’t compound it by not getting back on defense or something like that. He has the capability to come back and make up for it right away.”

Johnson insists that will happen.

“If I’m assertive and aggressive on that end,” Johnson said, “everything will take care of itself.”