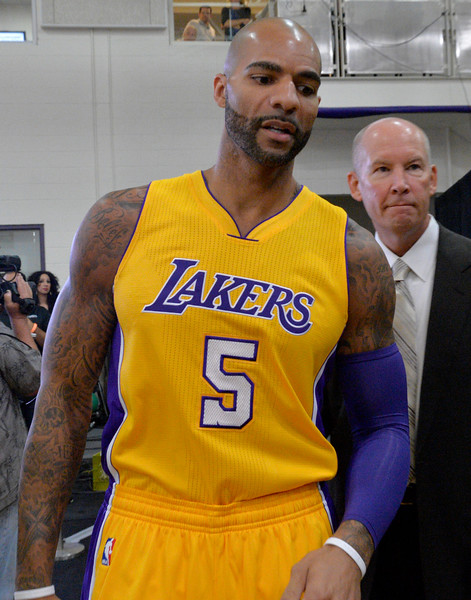 No matter how much Carlos Boozer gushes about the 90-degree weather he has enjoyed thus far in Los Angeles, there’s another more tangible explanation on why moving out here has become a far warmer experience than being in Chicago.

Boozer is just a season removed from sitting out for most fourth quarters because of concerns over his defensive deficiencies. The Bulls then waived Boozer through the amnesty provision. That backdrop may have the hurt the pride of a two-time All-Star and Beijing Olympic medalist. But Boozer has maintained he will forget about that chapter and ensure his time with the Lakers becomes a more pleasurable experience.

The Lakers picked Boozer up through an amnesty bid worth $3.2 million, a somewhat surprising move considering they drafted forward Julius Randle seventh overall out of the University of Kentucky and had recently signed Ed Davis through the free agency market. But Lakers coach Byron Scott has still penciled Boozer as the starter, confident that the 12-year NBA veteran will provide a presence that mirrors his career averages of 13.7 points on 45.6 percent shooting and 8.3 rebounds per game.

“Carlos has got a lot of experience and understands how to play this game,” Scott said. “He’s a good communicator out there. We know he’s a guy who can make mid-range shots. We know we can also throw it to him in the post a little bit too. Just trying to utilize him the best way we can to make him very effective on the court for us.”

Scott then said the Lakers plan to feature Boozer mostly on the elbows and the mid-post, confident he can either hit open jumpers or drive inside. The Lakers caught an early glimpse of that in their 98-95 victory Monday against the Denver Nuggets in San Diego. There, Boozer posted six points on 3-of-7 shooting, four rebounds and three assists. In the portions of Lakers’ scrimmages open to the media, Boozer has looked consistent with his mid-range jumper.

Beyond crediting his own repetition on his shot, Boozer credited his initial success toward playing with Kobe Bryant and Steve Nash.

“It has been really good chemistry right away, our IQ as a team is very high, especially with us three, just the way we’re able to read defenses,” Boozer said. “That’s the importance of the preseason to see where things will be at, too read each other to get used to what we do out there on the court so when the regular season comes, it’s a seamless transition.”

To a smaller degree, Boozer believes that has already happened.

“Obviously Kobe can score. He does that like breathing. But he also does a good job of drawing the defense in and setting us up for jump shots,” Boozer said. “Steve is amazing man. He’s really good, man. I really enjoy playing with Steve. It makes the game really easy, great vision, great decision making, his efficiency’s gotta be through the roof because he knocks down open shots. But he makes us all better too. It’s like he creates a shot for you so all you have to do is shoot it. He does all your work for you so all you’ve got to do is shoot it.”

Of course, Boozer knows he will have to work plenty this season, both to bounce back from last year’s campaign where he averaged 13.7 points and 8.3 rebounds and to maintain his starting spot over a Randle’s possible emergence. But Boozer has gushed both about Randle’s talent and mentoring him. The Lakers also believe Boozer will return back to full form.

“We have a lot of guys who have that extra added incentive and have chips on their shoulders with where they were last year and whatever might have happened,” Scott said. “Carlos is one of those guys as well.”