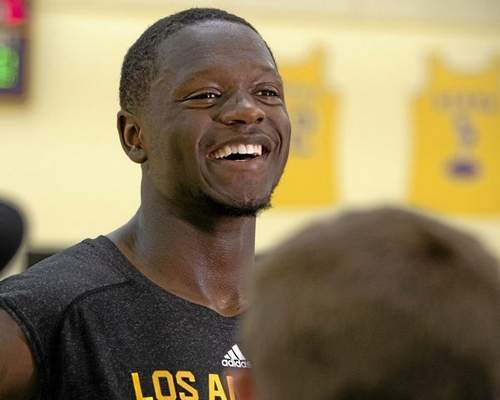 It did not take long for Lakers rookie Julius Randle to encounter frustrations with the bumper-to-bumper traffic that seemingly fills the high ways on every waking second throughout Los Angeles. But the Lakers have also sensed Randle struggling with his on-court navigation

Lakers coach Byron Scott observed that Randle “looked lost” for most of the Lakers’ 125-105 preseason loss on Thursday to the Golden State Warriors at Staples Center, a game in which the seventh overall pick finished with 12 points on 4 of 12 shooting, seven rebounds and five fouls in 18 minutes. Scott took particular aim at Randle’s first half performance where he posted three points on a 1-of-5 clip and three fouls.

“In the second half, I thought he was better,” Scott said. “But I thought the first half the game was too fast for him.”

The Lakers have echoed Randle’s self-criticism in recent days about his conditioning, but have also lauded him for his eagerness to learn from the team’s veteran laden unit. Therefore, Scott said “it’s expected” for Randle to encounter some early rookie struggles.

Yet, that hardly sits well with Randle who wants to expedite his learning curve.

“It had noting to do with the pace,” Randle said. “On one end, I was hesitating and not taking what the defense gave me. On the defensive end, I was being a little bit too aggressive. I wanted to get up and start a rhythm, but it took me out of my rhythm. I have to learn how to adjust. Things are being called tight and I was playing too aggressive.”

It did not help that Randle opened the game shooting a wild left hook shot that hit badly off the rim. Or that he collected his first two fouls within a 18-second span. Or that he looked uncomfortable with his mid-range jumper (1-of-6).

“He’s still getting his feet wet, right?” Lakers guard Kobe Bryant said. “He’s still getting used to the NBA game and the speed of the game and the biggest thing for me is to see him trust his jump shot. I think at this stage of his career it’s important for him to really start working on expanding his game early, facing up and shooting the ball.”

Randle conceded as much, hopeful the more detailed road map will help him out of the wilderness.

“You got to take what the defense gives you,” Randle said. “There are ways to be aggressive without trying too hard or exerting yourself too much by making silly mistakes. I did a lot of rookie mistakes today.”

Jordan Clarkson believes his strained left calf will be fine