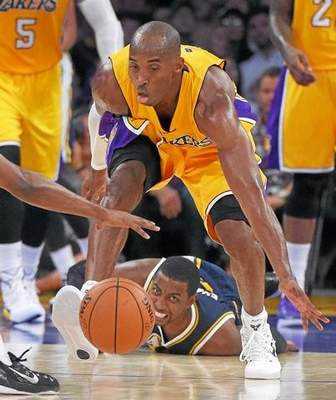 Kings guard Ramon Sessions said his departure from the Lakers two years ago had nothing to do with Kobe Bryant. MARK J. TERRILL — ASSOCIATED PRESS

Ramon Sessions shook his head and chuckled. He repeatedly wondered how his failed free agency bid to secure a long-term with the Lakers two years ago suddenly became cited as an example that he does not want to play with Kobe Bryant.

Sessions stressed he hardly felt upset about an ESPN The Magazine story that said he left because of Bryant’s presence. “I didn’t think nothing of it,” Sessions says. Yet, Sessions strongly disputed that Bryant played any role in his departure with the Lakers and eventually signing a multi-year deal with the former Charlotte Bobcats.

“That was never nothing I ever said,” said Sessions, who now plays with the Sacramento Kings. “I had an option to opt in or opt out. I was at a point where I wanted to get some stability. That was the only reason.”

The Lakers liked Sessions after acquiring him in a mid-season trade from the Cleveland Cavaliers. But after averaging 12.7 points and 6.2 assists in 23 regular-season games, Sessions posted only 9.3 points on 37.7 percent shooting and 3.6 assists in the NBA playoffs. The Lakers wanted to see him develop before committing to him long-term. Yet, Sessions stayed optimistic about his Lakers future after opting out of his $4.55 million player option.

“When I left there,” Sessions said, “I thought I was going to be coming back.”

The Lakers signed future Hall of Fame point guard Steve Nash on July 4, 2012 to a three-year, $28 million deal that involved sending two first and second round draft picks to the Phoenix Suns. With the Lakers’ backcourt already consisting of Steve Blake and Darius Morris, the Lakers found no need in retaining Sessions. Eight days later, Sessions signed with the Bobcats.

“We knew something was going on, but we didn’t know what it was,” said Sessions, who reported his representatives had constant communication with Lakers general manager Mitch Kupchak. “It seemed like there was a holding pattern. We didn’t know who [Mitch] was trying to get, but L.A. always wants the bigger name guys. Then I found out they were trying to get Nash. That’s when I knew it would be over.”

The Lakers hardly benefited from the Nash deal. The 40-year-old point guard was recently ruled out for the 2014-15 season because of persisting back problems, an issue that sidelined him for a combined 65 games in the previous two seasons. That’s why Sessions has conceded he plays the “what if” game about opting out of his deal.

After all, Sessions never secured long term security with either the Lakers or the Bobcats, which traded him last season to the Milwaukee Bucks. Sessions then signed with the Sacramento Kings this offseason, marking his sixth different NBA team in seven years.

“I wouldn’t say it’s tough since I’ve been doing it since day one,” said Sessions. “I’ve just been blessed to be around all these years.”

Yet, his curiosity in the Lakers seemed clear. He asked a reporter repeated questions about the Lakers’ roster. Sessions also sounded curious how Bryant looked during exhibition play after appearing in only six games last season because of a left Achilles tendon and left knee.

Said Sessions: “Hopefully he has a healthy season and can play all the games.”