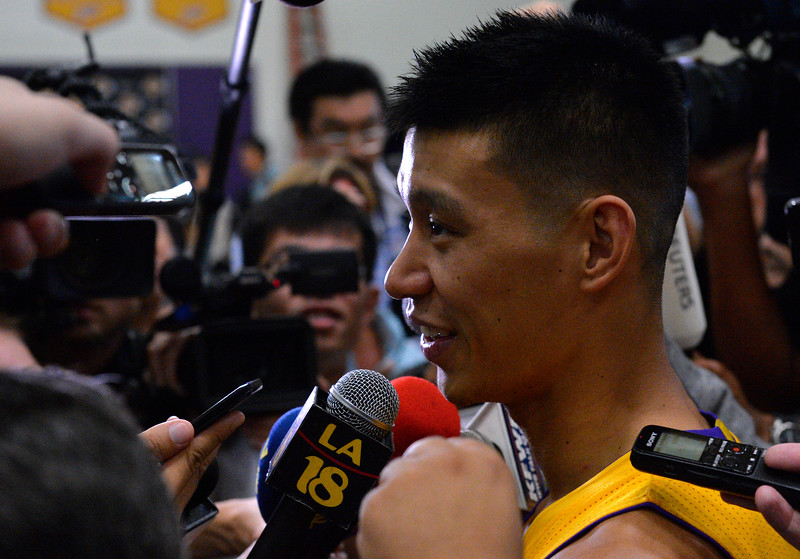 The Lakers have a long season to see how the dynamic between Kobe Bryant and Jeremy Lin work, let alone whether they can climb out of the Western Conference cellar.

But it appears Lin and Bryant have made some inroads on figuring out their chemistry. Following the Lakers’ double-digit loss on Wednesday to Phoenix, both coach Byron Scott and Bryant implored for Lin to improve his aggressiveness after seeing him go score only a combined 13 points in two games. Bryant also said Lin should not be afraid to run the offense even if Bryant calls for the ball.

It appears that has opened up dialogue between Bryant and Lin as the Lakers (0-2) enter tonight’s contest against the Clippers in a designated home game at Staples Center.

“I have to get comfortable,” Lin said. “The biggest thing is the communication. There are some things I need to do better for sure and run the team better. There are some ways the team can help me and create a system or structure to have that opportunity to do what I do best. We’re in communication with that.”

Bryant scored 31 of the Lakers’ 99 points against Phoenix, an approach the Lakers star said he took mostly because he felt the supporting cast around him wasn’t playing effectively enough. Carlos Boozer committed eight turnovers. The Lakers went 4-of-13 from three-point range. And Lin posted only six points on 2-of-5 shooting and one assist.

Lakers coach Byron Scott said he’s “not really worried” about Lin’s start and believes he will improve once with more games. But Scott provided a few suggestions. Scott believes Lin picks up his dribble too much and looks over to the sideline too often to call a play.

“He’s being assertive at times. But at the same time I think he’s thinking too much,” Scott said. “He should go out there, relax as much as possible and play. When he has shots, take his shots. When he has the ability to get to the basket, take it to the basket.”

Lin has had experience playing with other dominant scorers, such as New York’s Carmelo Anthony and Houston’s James Harden. But Bryant believes he’s “a different breed” because he prefers scoring off the ball in the post. Bryant maintains he only has assumed ball handling duties so he can carry an offense that is still become acquainted with one another.

“It’s something we talked about,” Lin said about Bryant. “He’s one of the all time greats in scoring. It’s about finding a way to utilize that within the team offense and highlighting that especially toward the end of the games.”