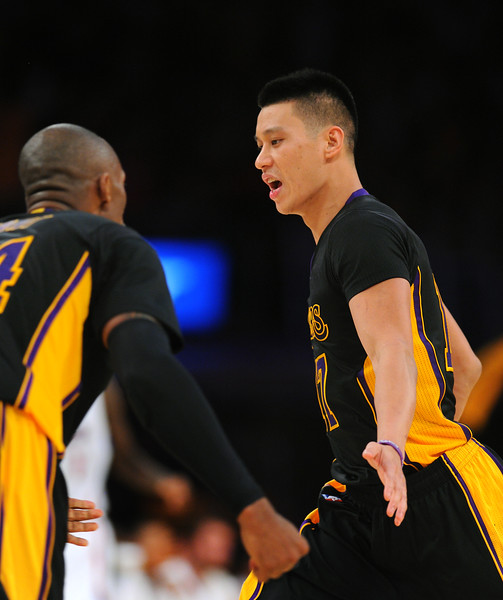 “The Lakers’ Jeremy Lin by Kobe Bryant after sinking a shot in the fourth quarter. (Photo by Michael Owen Baker/Los Angeles Daily News)”

On a franchise that defines itself on wins and losses, the Lakers’ mood did not match the current circumstances.

The Lakers’ 118-111 loss on Friday to the Clippers in a designated home game at Staples Center marked the third time they conceded more than 100 points. The game ended with Kobe Bryant missing a potentially game-tying three-pointer. The last time the Lakers opened the season with a three-game losing streak happened two years ago. The franchise soon fired Mike Brown two games later.

Then, the Lakers faced championship or bust expectations. The Lakers may still talk publicly about that goal, but injuries, a competitive Western Conference and a mostly new roster all make that a lofty expectation. But given that backdrop, everyone on the Lakers left away from a loss against their hometown rival feeling encouraged.

“I couldn’t be more pleased with this loss actually,” Lakers guard Kobe Bryant said. “We figured a lot of things out.”

It went beyond Bryant posting 21 points and seven assists in 35 minutes and even throwing down a reverse dunk that he admitted “shocked the [heck] out of myself.” In fact, Bryant’s 6-of-15 shooting clip entailed going 1-of-7 in the fourth quarter on shots Lakers coach Byron Scott said were “all shots I’d love for him to have again.”

Even if Bryant failed to secure a win as he has done so many times in the past, the Lakers made marked improvement in ensuring the burden does not solely fall on him.

Lakers forward Jordan Hill posted a team-high 23 points on 10-of-15 shooting, showing that his work in the summer on his mid-range game might finally pay off. Lakers guard Jeremy Lin added 17 points on 7-of-13 shooting, which eclipsed his 13 points he scored in his first two games with the Lakers. And Ed Davis’ 10 points on 5-of-6 shooting and six rebounds in 20 minutes off the bench has further cemented his role as a dependable energy player.

But most of the focus centered on Lin, whom Bryant and Scott pleaded to in recent days to play more aggressively.

“We trusted each other more and learned what that means,” Lin said. “We never thought we don’t trust each other. It’s just that we’re growing. We’re figuring out how to adjust to each other the best way.”

That entailed Bryant and Carlos Boozer sending a stream of text messages to Lin following the Lakers’ 119-99 loss on Wednesday to Phoenix.

Bryant had already told reporters he wanted Lin to run the offense and not feel afraid to stand up to him when Lin’s offensive vision goes against Bryant’s. Bryant and Lin carried that conversation over into the Lakers’ morning shootaround on Friday.

Bryant partly talked X’s and O’s, such as how he and Lin will share ball handling duties. But Bryant also mentioned to Lin that he and former teammate Derek Fisher “used to yell at each other all the time.” Yet, they still won five NBA championships together. Bryant also added, “I couldn’t love a teammate more.”

“I’m like every other human,” Lin said. “I’m going to be more comfortable and do more when I feel empowered. I take responsibility for most of my performance the first two games. That’s inexcusable for me to be the leader of this team and point guard of this team and play the way I did. I made some adjustments and try to talk the team on how we can create the best structure.”

Lin showcased what Bryant described as “the blueprint for how he should continue to play.”

Lin opened the game making a three-pointer at the top of the key. Lin attacked the basket and scored three baskets off of that approach. Lin helped Bryant flourish by moving off the ball and setting him up in the post.

Then there was a fourth-quarter play where Lin even waived Bryant off. Lin recalled noticing Bryant was drawing a double team, but unable to see Blake Griffin from behind. So Lin called for Bryant to set a pick for him. Lin then drained a 25-foot three-pointer that gave the Lakers a 106-103 lead with 4:39 left in the game.

“He’s good at listening,” Bryant said of Lin. “You have to be able to assert yourself, especially with a team I’m playing on. I don’t want chumps and I don’t want pushovers. If you’re a chump, I will run over you. It’s important o have that toughness and say, ‘I believe in myself. I can step up, make these plays and perform.’ Sometimes you have to piss on a fire hydrant.”

That hardly proved enough to end the Lakers’ losing. Griffin still dropped 39 points. Scott also griped that the free throw differential between the Lakers (20-of-28) and the Clippers (38-of-44) suggested that it “just seemed like they got more calls than we did.”

But the Lakers remain intent such an approach will help them climb out of their early-season problems. The Lakers will find out if that will work when they play on Saturday in Golden State, another opponent who could prove too difficult to satisfy the bottom line result amid the Lakers providing positive developments.