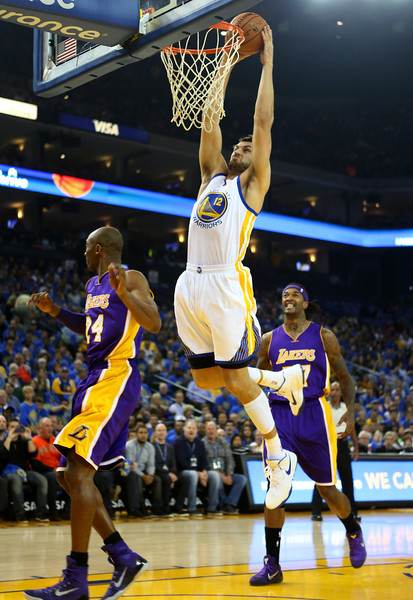 OAKLAND — The tidal waves loomed on the horizon, providing plenty of forewarning that it would soon crash furiously along the shores.

The Lakers may have anticipated it. They may have tried to run for cover to escape the fury. And they may have even offered some resistance. But then the inevitable happened.

The Golden State Warriors sent the Lakers crashing in their intra-coastal rivalry, a 127-104 defeat on Saturday here at Oracle Arena throwing figurative sand in their face as they tried to swim upstream. The so-called “Splash Brothers” in Klay Thompson and Stephen Curry soaked the Lakers with a combined 72 points. When the Warriors were not sinking 11 three-pointers on 23 attempts, they were punishing the Lakers inside with 62 points in the paint. The Warriors also wiped the Lakers out at a furious pace with 35-fast break points.

Once it all ended, the Lakers opened the season with a 0-4 record for the first time since 1957, a terrible historical footnote explained by numerous factors. They range from countless injuries, a brutal opening schedule and a new roster. But amid that backdrop stands one looming reason. The Lakers have made little progress in excelling on defense, an area coach Byron Scott had tabbed as his top priority ever since taking over the reigns this summer.

“Defensively, we’ve just got to get tougher and we’ve got to get a little bit more grittier,” Scott said. “Sometimes we lose focus after we score and all of a sudden we relax. You can’t relax, especially against a team like this that can score at will.”

Scott then told his players afterwards that there are “a lot of little things that we can control.” But through the Lakers’ four losses, those little things have morphed into huge problems.

The Lakers have allowed opponents to shoot 43.6 percent from three-point range. They have conceded an average of 21.2 fast-break points. The Lakers have already allowed All-Star caliber players from having superb nights, including Houston’s James Harden (32 points), Phoenix’s Isaiah Thomas (23 points), the Clippers’ Blake Griffin (39 points) and Thompson (a career-high 41 points).

Add it all up, and the Lakers rank last out of 30 NBA teams in nearly every statistical category. They currently stand last in total points allowed (118 points per game), defensive field-goal percentage (50.5 percent) and fast-break points allowed. The Lakers also fall in 28th place for defensive three-point field goal percentage.

“It’s just about getting better at it,” Lakers guard Kobe Bryant said. “We played a couple really tough teams. Their big players stepped up and made some really big plays. You’ve got to give them a lot of credit. We’re moving in the right direction. We’ve got to stay the course.”

The Lakers tried to stay the course against Golden State, using a well balanced offense to offset the Warriors’ scoring onslaught. Bryant’s 28 points on 12-of-28 shooting featured him scoring 19 third-quarter points. The Lakers complemented Bryant with Jordan Hill’s emerging mid-range game (23 points on 10-of-14 shooting), Wesley Johnson’s aggressiveness (15 points on 6-of-9 shooting) and Ed Davis’ long-lasting energy (13 points on 5-of-7 shooting).

Even with that, the Warriors still outscored the Lakers 32-31 in the third quarter. They then went on a 34-18 fourth quarter blitz to close out the game.

“We made hay, but they have a lot of firepower,” Bryant said. “You can’t blink or give them an edge because they pull the trigger quick. They’re very active.”

So that begs the question. Considering the Lakers entered their season with four games in five nights against some of the Western Conference’s most prolific offenses, how long will it take for the Lakers to improve defensively? After all, Scott said during training camp he envisioned the Lakers capable enough of ranking at least top 15 in total defense.

Scott maintains he will not make any lineup changes and suggested he will only do so if the Lakers fail to make substantial progress after 15-20 games. Instead, Scott said the team can correct the defensive issues another way.

Scott has chalked up the Lakers’ perimeter defense mostly toward leaving corner three-pointers uncontested out of fear of leaving the top of the key open. Scott has implored for the Lakers to play on offense at a deliberate pace and for his team to hustle back on defense to ensure more half-court sets. Scott also took aim at Lakers center Jordan Hill and forward Carlos Boozer.

Hill conceded he needs to improve on defense, but he also spread the blame.

“We definitely got to communicate. Everybody does,” Hill said. “There’s a lot of wide open layups. There are times I had to help the guard and no one cracked out on my man. But we’ve been having trouble the past couple of years on the defensive end. We have to make it our main focal point. If we communicate, talk loud and be in the right position at the right time, we shouldn’t have nothing to worry about with getting any wins or contesting against any other good teams.”

But so far, the Lakers have hardly come close in fulfilling that job description. Instead, their opponents have unleashed offenses so forceful that the Lakers have struggled to fight against the current.