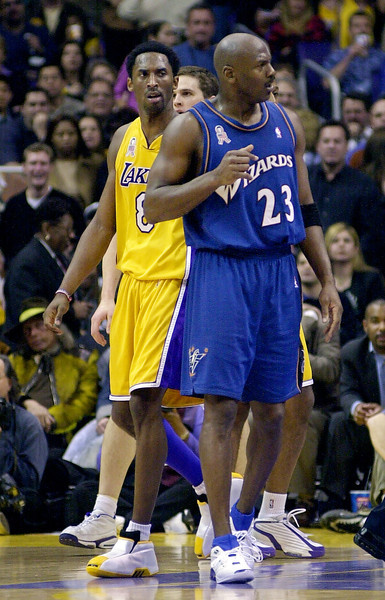 The comparisons to Michael Jordan continuously overshadowed Kobe Bryant throughout his career. Would Bryant become Jordan’s heir apparent? Will Bryant ever match or eclipse Jordan’s sixth NBA championships? Bryant enters the Lakers’ (0-5) game on Sunday against the Charlotte Hornets (2-3) at Staples Center only 454 points of surpassing Jordan for third-place on the all-time scoring list.

But Bryant found little interest in speaking in great detail on any parallels he sees between his current stage of his 19-year career and when Jordan spent his last two NBA seasons over a decade ago with the Washington Wizards after spending most of his career with the Chicago Bulls.

The 36-year-old Bryant first laughed when asked if there were similarities.

He wasn’t in Chicago, playing for the same organization for all those years. It’s a little different. I’m still younger than he was,” Bryant said. “I can see where you guys are thinking there’s similarities there. I also think it’s probably reachable content at this point. I get it. So, yeah, there’s similarities. Then there are differences. Just have at it.”

Bryant spent his 19-year career with the Lakers, while Jordan played in two separate stints in Chicago (1984-93, 1995-98) before playing in Washington (2001-03) in what marked his second comeback of his career. Jordan was also 38 and 39 years old when he played for the Wizards.

But Wizards went 37-45 and 37-45 before missing the playoffs in Jordan’s last two seasons. He retired in 2003 after averaging 20 points that season. The Lakers are off to their worst start since the 1957-58 Minneapolis Lakers lost seven consecutive games. Bryant has averaged 27.6 points this season albeit on 40.2 percent shooting.