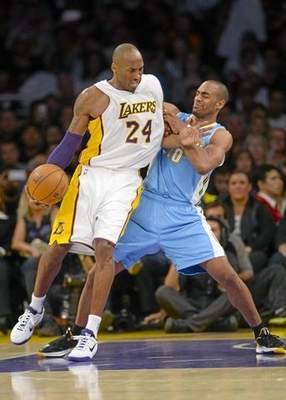 The clock started ticking away. The Lakers needed a basket to secure the win. So that circumstance meant one thing, and one thing only.

Kobe Bryant would have the ball in his hands. He would shoot the ball. And the Lakers’ success would hinge on whether or not he made the basket.

“I could have gotten a better one,” Bryant said, “but that was a shot I practiced my entire career.”

Bryant’s 19-foot fallaway jumper clanked off the rim just before regulation expired. Nick Young was left standing open at the top of the key. And though the Lakers’ 101-94 loss on Sunday to the Denver Nuggets at Staples Center did not become official until overtime, Bryant’s missed shot opened up a debate that has become all too common during his 19-year career.

Have the Lakers become too dependent on Kobe Bryant?

“Not really,” Lakers coach Byron Scott said. “I thought tonight because of the way they were loading up, they did a great job in forcing them to come at him. When they came at him, he did a great job of finding guys. We just missed shots.”

“At times, we fall into relying on No. 24 a lot,” Lakers forward Nick Young said. “We got to believe in ourselves. I believe in everybody on this team. Kobe is going to be Kobe. But we have to find a way to put the ball in the hole with everybody else.”

Wesley Johnson’s one-handed dunk over Denver’s Danilo Gallinari on a fast-break may have sparked the Lakers enough for Robert Sacre to dance from the bench and ignite the 18,997 fans at Staples Center. The play may have given the Lakers a 85-82 lead with 3:15 left in the game. The play may have signaled the Lakers (3-11) were ready collect their third win in the past four games by relying on defensive hustle and offensive balance.

But then it didn’t.

The Lakers did not score in the rest of the fourth quarter. Bryant’s 27 points on 10-of-24 shooting featuring him missing seven of his last eight attempts. And though Scott also cited the Lakers’ woes in the fourth quarter and in overtime both from the foul line (7-of-11) and offensive rebound disparity (9-2), Bryant’s shooting accuracy became a topic of conversation.

Scott believes he can correct that balance by with better team defense and a supporting cast matching his aggressiveness. But the Lakers could have managed to overlook those problems had Bryant’s game-winner dropped in, something that happened so many times in the past suddenly falling short.

“I could have gotten a better one,” Bryant said. “But that was a shot I practiced my entire career.”

Lakers fall in overtime to Denver at Staples Center