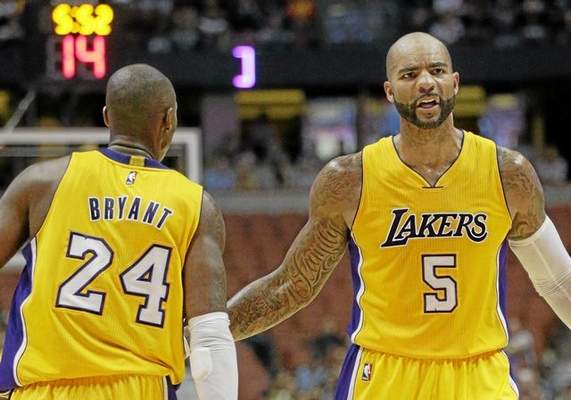 Kobe Bryant (24), Carlos Boozer (5) and Jeremy Lin (not pictured) sat out Saturday’s practice with the L.A. Lakers. Boozer and Lin are listed as probably, while Bryant was given the day off in order to be rested for their game against Denver at Staples Center Sunday, Nov. 23, 2014. (File photo/AP Photo)

Despite missing the past two practices because of respective left shoulder and right ankle injuries, both forward Carlos Boozer and Ed Davis are expected to play tonight when the Lakers (3-11) host the Memphis Grizzlies (12-2) at Staples Center.

They went through shootaround and they both moved pretty well, so I take it that they will both be available tonight,” Lakers coach Byron Scott said. “Unless something drastically changes in the next seven to eight hours. I think they’ll be ready to play.”

Boozer will start, while Davis will return back to his reserve role. Although Scott has often asked more on defense from Boozer, he has still averaged 13.3 points and 6.5 rebounds through 13 games. Davis has become an energetic force as a reserve, averaging eight points on 62.5 percent shooting and 6.6 rebounds in 22 minutes. But he struggled filling in as a starter while Boozer nursed a sore left shoulder during the Lakers’ 101-94 loss on Sunday to Denver. There, Davis posted only four points on 1-of-3 shooting and five rebounds and fouled out in only 22 minutes of play.

The Lakers are reeling with plenty of injuries. They have season-ending injuries to Steve Nash (back), Julius Randle (right leg) and Xavier Henry (left Achilles). Lakers forward Ryan Kelly also remains sidelined for at least five more weeks because of a torn right hamstring.