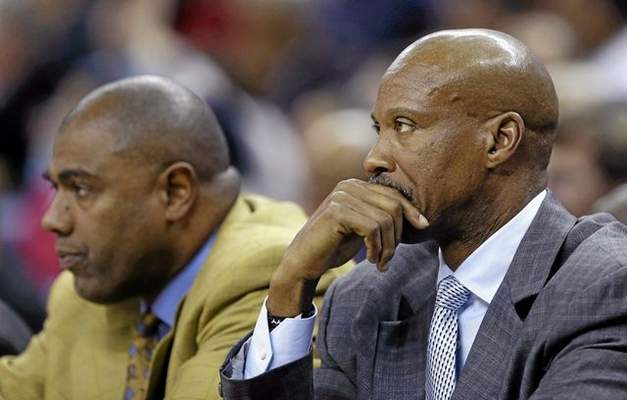 Los Angeles Lakers coach Byron Scott, sitting next to assistant coach Paul Pressey during the Lakers 109-102 loss to New Orleans, said he would like to talk to Steve Nash, but the point guard hasn’t returned his call. (AP Photo/Gerald Herbert)

Scott revealed on Sunday he and Nash have still not connected on the phone since the Lakers ruled the 40-year-old guard out for the season in late October, their conversations amounting toward nothing more than periodic text messages. But Scott hardly sounded upset over this development.

“Steve’s a busy guy and I’m a busy guy as well,” Scott said. “I don’t think he misses sleep over it and I don’t miss any sleep over it. He’s a great guy and have known for Steve for a long time. Not to have contract with one another at this particular time, to me it’s not a big deal.”

The Lakers still owe Nash $9.8 million on the final year of his contract and have shown interest in him becoming a mentor for the team’s backcourt, including Jeremy Lin and Jordan Clarkson. After all, Nash collected two NBA MVP awards and climbed to third place on the league’s all-time assists list.

Nash hasn’t spoken to reporters since the Lakers ruled him out in late October. But the Lakers have dismissed any significant about Nash’s absence and haven’t wavered on granting him the freedom to choose whether to maintain his distance or return to the team.

“We want Steve to do that on his own time frame,” Scott said about a mentorship role. “When you’re out for the season and doing that this whole life, that’s hard to take and swallow at times. Some guys don’t come to the realization for a long time. Right now, he wants to spend time with his family and I understand. He wants to take this slow. I don’t understand the big deal about it.”

Lakers’ Byron Scott said lineup changes are coming, but when?